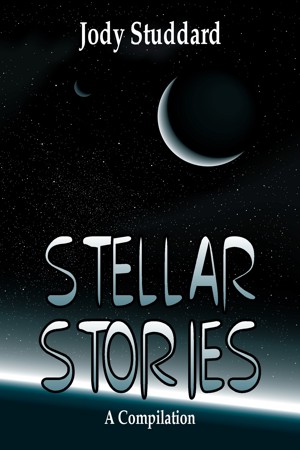 By Jody Studdard
Stellar Stories is a collection of three of Jody Studdard's science fiction stories: Escape from Dinosaur Planet, Droid War, and Starlite Cinema. Get ready for adventure on a planet ruled by dinosaurs, in a solar system filled with conflict, and in a movie theater that makes everything come to life. Three great books at one great price!

Jody Studdard is the author of several children’s novels, including A Different Diamond, Fastpitch Fever, Escape from Dinosaur Planet, and The Sheriff of Sundown City. He is a graduate of Monroe High School (1989), the University of Washington (1993), and California Western School of Law (1995). In addition to writing, he is a practicing attorney with an office in Everett, Washington. He is a fan of the Seahawks, Storm, and Sounders FC.

You have subscribed to alerts for Jody Studdard.

You have been added to Jody Studdard's favorite list.

You can also sign-up to receive email notifications whenever Jody Studdard releases a new book.