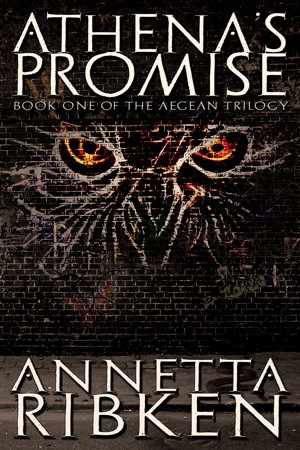 Athena's Promise - Book One Of The Aegean Trilogy

By Annetta Ribken
Rated 4.00/5 based on 1 review
As the front desk manager of a hotel on the edge of Zombietown, Pallas is used to dealing with angry centaurs, surly trolls, and zombie housekeepers. The trouble really starts when one of her guests ends up dead. But that's not her only problem.

As the front desk manager of a hotel on the edge of Zombietown, Pallas is used to dealing with angry centaurs, surly trolls, and zombie housekeepers. The trouble really starts when one of her guests ends up dead. But that's not her only problem.

A cop with an attitude – can he be trusted to be more than just a pain in her ass or does he have a more sinister agenda?

A new Guest Services Manager, out for her job and ready to sacrifice anyone in his way – what does he really want?

The attractive maintenance guy, endangering the promise she made out of necessity to the Goddess Athena – does he know more than he's telling?

A mermaid diva, whose show at the Sparkling Butterfly must go on – or else.

Pallas needs to find the killer, and fast, or she'll lose her job, her home, and the ragtag family she's adopted out of her crew of "critters".

In the course of the investigation Pallas uncovers connections to a nasty Oddities dealer deep in the heart of Zombietown, forcing her to expose a trauma from her past which could threaten her future. With everyone and everything she loves in danger, the promise made to the Goddess Athena may well damn her if she breaks it, but she is bound and determined to save her friends, her home, and everything she's built.

A professional editor of over eighty novels, Annetta Ribken has also been writing since a tender young age, when letters were chiseled on stone tablets. A precocious student, Annetta earned her Ph.D in the School of Hard Knocks, with honors, in the early Age of Disco. She lives and works just outside of St. Louis with her evil feline overlord, a rescued shelter cat named Athena.

While the cover is beautiful, I don’t find it to be representative of the overall work. To me, that cover invokes an air of mystery, a speculative work of either high fantasy or science fiction. So I think that also affected the way I perceived the novel – because it’s not any of those. Instead, it’s a delightful, light, funny work with a little magic thrown in.

Athena’s promise feels like what would happen if Janet Evanovich started writing fantasy. The female characters are bright and sassy, the overall premise of both the world and the story are amusing, and the telling is original, fresh and funny (although I did find it a little stretched in one or two places.) Ribken’s editing background comes out pretty strongly – I found only a few minor errors in the work, and absolutely nothing that affected its comprehensibility – just minor things like missing punctuation marks and occasional shifts in tense.

Its overall style and tone are very evocative of “chick-lit”, but I think that the creativity of the author (as well as her knowledge of Greek and Roman mythology) really put it a cut above the genre. For example, her treatment of “zombies” is sensational – Ribken gives them a subculture all their own, and has thoroughly investigated their religion, appearance, interactions with other members of society, segregation in living arrangements – it’s pretty clear that she’s put a ton of thought into developing an intriguing world with a complicated and complex structure. All of the “critters”, from vampires to centaurs, get the same treatment. I think that’s why that, although I’m not a fan of romances overall (and I don’t know that I would classify this book as a strict romance, although the relationship between the main character and a supporting character takes a pretty pivotal role towards the end), I thoroughly enjoyed this book. It’s a quick, light read – perfect beach material for the more magical of us.

You have subscribed to alerts for Annetta Ribken.

You have been added to Annetta Ribken's favorite list.

You can also sign-up to receive email notifications whenever Annetta Ribken releases a new book.