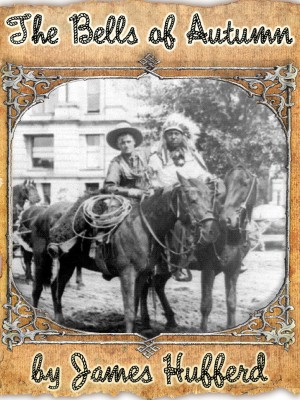 The Bells of Autumn

By James Hufferd
The Bells of Autumn tells of a young boy growing up with an older, adoptive father, a partly Indian-raised pariah, in a Wyoming town trying to leave its violent past. On another level, it explores white-Indian relations in the American psyche. The story devolves around the harsh banishment of the Lakota and the generation-later Battle of Lightning Creek (1903), a surprising minor rematch. More
Based on real incidents, in 1903 a small western town (Newcastle, Wyoming) struggles to leave behind its remembered violent recent past of Indian wars and fighting outlaws and enter the 20th century. Arrayed against this intent is the reality of a surprising current battle with returning Sioux Indians, vigilante actions and a heavy, lingering pall of fear, hatred and distrust of the legal justice system fomented by a bullying town father. Events are viewed through the eyes of a precocious adolescent boy and his old, adoptive dad who, as the son of the Army’s contracted storekeeper at Fort Laramie before the slaughter of the buffalo, had been partly raised by Indians. Related Indian perspectives and angst are also presented through the engaging narrative.
Available ebook formats: epub mobi pdf rtf lrf pdb txt html
First 20% Sample: epub mobi (Kindle) lrf more Online Reader
pdb
Price: $4.99 USD
Buy Add to Library Give as a Gift
How gifting works
Create Widget
Tags: gold historical fiction cowboy indian mining american west wyoming 1900
About James Hufferd

James Hufferd (born in Iowa, 1946), attended public schools and grew up in a small farming environment. He earned a Bachelor's degree in History at Iowa State University, a Master's in International Studies at University of Wyoming, and a Ph.D. in Geography at University of Minnesota (1979). He has taught in elementary schools (including an isolated one-room rural school in eastern Nevada) and numerous universities, and has traveled and researched in 19 countries, including the Canadian Eastern and High Arctic and various parts of Brazil. Fluent in Portuguese, James Hufferd was twice a Research Associate in Residence at Federal University of Rio de Janeiro.

In addition to "The Bells of Autumn," a Western historical novel, James Hufferd has written and published (2005) in two volumes the first narrative history of Brazil published in English since 1819, entitled "Cruzeiro do Sul, A History of Brazil’s Half-Millennium."

His 2011 historical novel, "The Bells of Autumn," is an exploration of white-Indian relations in the American West as well as a portrayal of the early legacy of a section of the northern Great Plains.

James Hufferd is also the author of "The Majoritarian Solution," a very early assessment of American corporatism (1985), "Homeland: A Comedy," a satiric novel to be available in December, 2011, and "Troublesome Country," a historical/political essay to be published in late winter, 2012. He is particularly interested in the political economy and history of the U.S. and the international/global New World Order, and is currently completing a novel entitled "Evil Vanquished! The Extraordinary Rendition of the Bilderberg."

Reviews of The Bells of Autumn by James Hufferd

You have subscribed to alerts for James Hufferd.

You have been added to James Hufferd's favorite list.

You can also sign-up to receive email notifications whenever James Hufferd releases a new book.