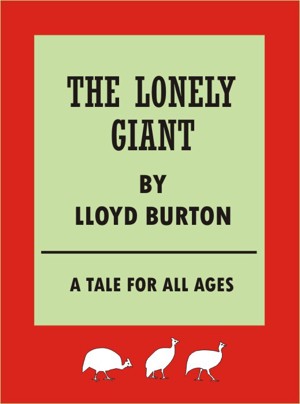 By Lloyd Burton
Orphaned at a tender age, the infant giant Albert is raised by servants in a ramshackle castle. At eighteen years old he strikes out to trace his lost family. He meets a questing Knight, joins a circus, falls in love and confronts dragons and monsters before learning the dreadful truth about his origins. Shocked, he abandons his search and resolves to make a life among the kindly circus folk. More
The Lonely Giant is the story of a giant who was orphaned at a tender age and brought up in isolation by aged servants. At the age of eighteen the young Alfred embarks upon a search to find his lost family. Equipped only with the strict moral precepts inculcated by his Scots nurse, he quits his ramshackle castle to enter upon a series of adventures that take him across the breadth of medieval England. He meets a questing Knight, joins a circus, is robbed by a fair lady and confronts ogres and monsters before learning the dreadful truth about his origins. This revelation forces Alfred to make a radical change in his aspirations. He returns to the circus only to find that his friends have been ruined by a crooked businessman, but cleverly turns the tables and saves the situation. Alfred and his friends join forces to find a refuge for the winter. Overcoming more challenges and difficulties, they find a safe haven in an unexpected quarter. Eventually Alfred finds love, happiness and fulfillment in his own place.
Available ebook formats: epub mobi pdf rtf lrf pdb txt html
First 20% Sample: epub mobi (Kindle) lrf more Online Reader
pdb
Price: $1.99 USD
Buy Add to Library Give as a Gift
How gifting works
Create Widget
Tags: magic witch dwarf dragon knight quest giant sword circus
About Lloyd Burton

After working for many years in Eastern and Southern Africa, where he has traveled extensively, Lloyd Burton now lives in retirement at Somerset West, South Africa. He is married and has two adult children. His main interest is writing.
Lloyd Burton’s first published works were a series of short stories on topical subjects that appeared in the Kenya Weekly News. His first full-length book, 'The Yellow Mountain' was published in Rhodesia (now Zimbabwe}. It was adjudged best Rhodesian novel for 1978 and gained a nomination in that category for the prestigious Kingston Literary Award.
Then followed a long literary drought. Lloyd says: "Realizing eventually that I was fixated on the African conflict experience, I made a deliberate effort to apply myself to a completely new genre. I chose fantasy. My models of excellence were ‘The Hobbit’ by J.R.R.Tolkien and ‘The Wind in the Willows’ by Kenneth Graham. I also greatly admire the prose of Beatrix Potter.
"I began to write a series of short and not-so-short stories. Presented in the style of children's tales, they are really intended for grown-ups, like the books mentioned above. As there is no 'adult' content, children who are advanced readers may also enjoy them.
"Although these stories were written initially as an exercise and for my own amusement, over the years I accumulated a lot of work that did not fit into any of the popular pidgeon holes of commercial publishing. But a writer needs a readership, and with the advent of e-publishing I decided to let readers be the judges of quality, regardless of established genres.”

‘The Yellow Mountain’ is at present out of print. ‘Enchanted Kingdoms’ and ‘The Travels of Tuckmouse’ were published by Crink Publications where they are still available in hard copy. The latter is a full novel while the former is a collection of longer and shorter stories.
‘The Travels of Tuckmouse’ has been republished as an e-book by Smashwords, while ‘The Wicked Queen’, which first appeared in ‘Enchanted Kingdoms’ is now presented as a separate book. ‘The Lonely Giant’ is a full length novel, while 'The Ugly Sisters and Other Stories' is a collection of novelettes and shorter stories. Other books will soon follow.

Reviews of The Lonely Giant by Lloyd Burton

You have subscribed to alerts for Lloyd Burton.

You have been added to Lloyd Burton's favorite list.

You can also sign-up to receive email notifications whenever Lloyd Burton releases a new book.