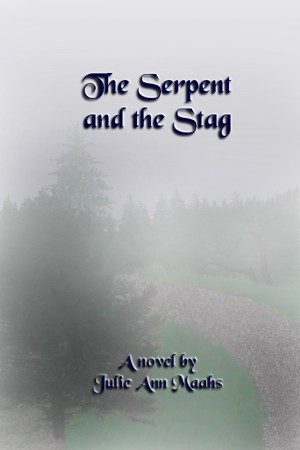 The Serpent and the Stag

Writers are not supposed to have idyllic childhoods, and certainly it didn't seem all that idyllic at the time. I was the youngest of three kids, growing up in a small town in Northern California. The natural beauty of the region and the mystery of the coastal fog show up often in my writing. By conventional standards, small towns don't provide a lot in the way of entertainment, but I wasn't exactly conventional. There was a library, and that was paradise.

I can't remember when I learned to read. I remember being very young, sitting with my father and reading aloud. Books were my first love, I think. The big picture books, the Little Golden Books, the Harvey comic books, and even the books with no pictures at all.

They were portals to other worlds, to places where exciting adventures happened, where heroes always knew just enough to solve the mystery, and where every story, no matter how scary, was sure to have a happy ending. Between the pages of a book I could be fearless and agile, not awkward and shy. Nowhere in the world was too far away to travel on such wings.

As soon as I was old enough I discovered the library. I don't know when that was, but I remember seeing a library card with a 1964 expiration date, so I was not yet five. The library was a wonderful place, smelling of old books, with a loft just right for curling up to read in privacy. There, my world expanded further, from Doctor Doolittle to Nancy Drew, the Hardy Boys, and the Black Stallion series. Also the classics: Heidi, Pollyanna, and Lad: a dog. I read them all well before reaching adolescence. Mary Stewart earned a special place in my heart back then.

Time happened, as it does to all of us. I abandoned most fiction when I went to college (California State University, Sacramento). I studied language and philosophy, and read classic literature. Writing seemed rather pointless, although I did write some children's stories during that era.

I did not write seriously until the mid-1990's. After a back injury put me out of work, I sat down with a box of pencils and some wire-bound notebooks. But I still needed a reliable source of income, so instead of finishing the three novels I began at that time, I put them aside and turned my attention to the study of income tax. Now I have a well-established, albeit struggling, income tax business, and it seems time to share these stories with the world. Let me know if you like them.

Oh, and since you asked: I currently live in Sacramento, California with my husband Walt, our dog Sassy, and our cats Big Boy, Tortie and Calico.

Reviews of The Serpent and the Stag by Julie Ann Maahs

Review
Kingbrian reviewed on March 19, 2010
(no rating)
This is literary magic. It appears that Sarah is a mite superstitious, and consistently dumb for someone her age. She is feisty too. Quite refreshing in a heroine. There are more than a few clichés, well placed though. I suppose that it is what makes it a such a must read. Very Good dialogue. The characters are real. No over-lap in personalities what so ever. A sometimes campy but always sweet love story ...if it weren't so naughty I would say that it is a Nancy Drew type mystery and written for the tweener girl audience. It gets downright dirty.

(reviewed 6 days after purchase)
Tegwedd ShadowDancer reviewed on March 14, 2010
(no rating)
I just finished reading Julie Ann Maahs’ novel “The Serpent and the Stag.” You should read it. You really should. I think it has something for each of us. In a way, it kind of reminds me of the movie “The Wizard of Oz”, where the scenes on the Kansas farm are in stark black and white, while the scenes in Oz are in full Technicolor. Sarah Marie starts out in the drab black and white world of fundamentalist Christianity, where they themselves are the only white pure ones, while anyone who disagree with them are creatures of darkness, and evil. She is plunged into a weird wide colorful world, when she goes looking for her father, and ends up at his commune, an idyllic, colorful place, which Sarah nonetheless sees as Satan’s playground. Were this book to be made into a movie, and I the art and lighting director, I would have all the scenes before Sarah runs away shot on black and white stock. Then when she meets Sam, it’s in color, but in very dark hues, all of it shot either at night, or in day-for-night. When she finally gets to the commune, everything would be in brilliant sun-washed color. Maybe I’d have the colors a little muted to symbolize Sarah’s point of view that all these people are devil-worshippers, and so, lost to her god.

It is a murder mystery, but Sarah is not a prime character in the mystery, a potential victim perhaps. Some Christians may object that the villain spouts all this righteous-sounding language, but speaking as a Pagan, I like it. I’m sure we’ve all heard far too many villains spout holy sounding language.

If I were a movie producer looking for a story to shoot, I would pick this one. It teaches all of us that we have something to learn about others, and that different does not mean bad.

You have subscribed to Smashwords Alerts new release notifications for Julie Ann Maahs.

You have been added to Julie Ann Maahs's favorite list.

You can also sign-up to receive email notifications whenever Julie Ann Maahs releases a new book.