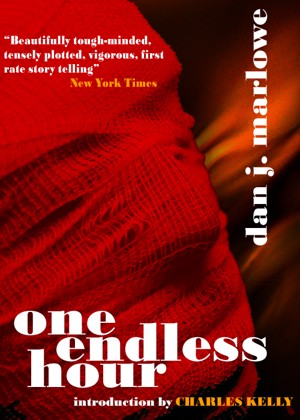 By Dan Marlowe
One Endless Hour offers the chilling tale of a bank robber whose fire-ravaged face is reconstructed, making him “The Man With Nobody’s Face.” This allows him to resume his criminal career with the help of a gambling addict and a director of sex-exploitation films. More
One of the most unusual hard-boiled novels, this story traces the efforts of the brutally effective bank robber in Dan Marlowe’s The Name of the Game is Death to recover from devastating fire damage to his face and resume his career. One Endless Hour begins with a summary of the end of The Name of the Game is Death, but quickly moves on to a tale that is both peculiar and nerve-wracking. The protagonist, who calls himself Earl Drake, hooks up with a gambling addict named Preacher Harris and a pornographic film maker named Dick Dahl to try to pull off a huge, complex heist that even he fears will fail.
Available ebook formats: epub mobi pdf rtf lrf pdb txt html
First 20% Sample: epub mobi (Kindle) lrf more Online Reader
pdb
Price: $2.99 USD
Buy Add to Library Give as a Gift
How gifting works
Create Widget
Tags: crime adventure mystery action hardboiled bank robbery dan marlowe
About Dan Marlowe

Dan J. Marlowe (1914-1986), a master of the gun-and-fist suspense novel, has been called “hardest of the hard-boiled” by no less a figure than bestselling horror writer Stephen King. King dedicated his 2005 novel, The Colorado Kid, to Marlowe. In 1967, The New York Times' Anthony Boucher called Marlowe one of the country's top writers of original softcover suspense, numbering him with such authors as John D. MacDonald, Brett Halliday, Donald Hamilton, Richard Stark (a pseudonym for Donald Westlake), and Edward Aarons. Alone and in collaboration, Marlowe wrote more than 25 thrillers. Some of his best work featured an amoral bank robber, Earl Drake, who later morphed into a rebellious but effective secret agent.

Reviews of One Endless Hour by Dan Marlowe

You have subscribed to Smashwords Alerts new release notifications for Dan Marlowe.

You have been added to Dan Marlowe's favorite list.

You can also sign-up to receive email notifications whenever Dan Marlowe releases a new book.