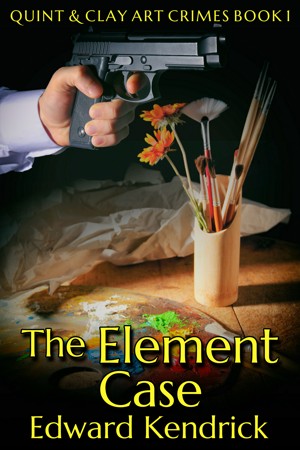 Can Clay, an artist, and Quint, a homicide detective, determine who is murdering the subjects of Clay's Element paintings? As they search for the killer, they're attracted to each other, but it can't become more if the killer eliminates Clay. More
Clay Richardson is a well-known artist who owns his own gallery.

Quint Hawk, a police detective, makes contact with Clay when he sees a portrait Clay has painted in the window of the gallery -- a portrait of a homeless young man who was murdered just days before. Unfortunately, Clay has no idea who the subject was.

Several months later, Quint contacts Clay to again ask about one of Clay's paintings. The subject has been murdered, as has a third man in another of his paintings.

The reclusive artist and the handsome detective are drawn to each other as they try to determine what is happening and why. They come up with a plan to catch the killer -- a plan that could end up in their deaths before they can decide if there is more to their feelings than a couple of very good nights in Clay's bed.
Available ebook formats: epub mobi pdf lrf pdb txt html
First 20% Sample: epub mobi (Kindle) lrf more Online Reader
pdb
Price: $3.99
$1.99 USD
Buy with coupon Use the code EBW50 at checkout for 50% off during our site-wide promotion!
(Offer good through March 13, 2021 )
Have a better coupon?
Add to cart, then apply your coupon
Add to Library Give as a Gift (using coupon)
Have a better coupon?
Add to cart for gifting, then apply your coupon
How gifting works
Create Widget
Tags: gay
About Edward Kendrick

Reviews of The Element Case by Edward Kendrick

You have subscribed to alerts for Edward Kendrick.