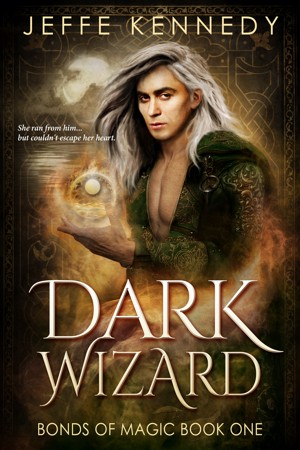 By Jeffe Kennedy
“Dark Wizard is one of my top reads ever.” ~ NY Times Bestselling Author Darynda Jones

The Witcher meets The Selection…

She ran from him... but couldn't escape her heart. More
“Dark Wizard is one of my top reads ever.” ~ NY Times Bestselling Author Darynda Jones

“Dark Wizard will be on my keeper shelf for freaking ever.” ~ NY Times Bestselling Author Dana Marton

“Jeffe nailed what it is to write a fantasy romance. Fabulous!” ~ USAT Bestselling Author of Radiance, Grace Draven

"...utterly compelling...clicked Buy right at the end of the sample and just kept reading and reading because this book is so good, with such a rich world and characters. I'm so glad I picked it up...now can it be June already so I can read more?" ~Amazon reviewer

She ran from him... but couldn't escape her heart.

Lord Gabriel Phel wants one thing: to rebuild the shattered fortunes of his people and restore his ruined house to its former station in the Convocation’s highest tiers of elegant society. Fortunately, through a wild chance of birth, he was born with powerful wizard magic, the first in his family in generations. If he can obtain a familiar to amplify his magic, a highborn daughter he can marry, to be mother to his children, he’ll be that much closer to saving his family. With her by his side, he can ascend to such a position of power in the Convocation that he can destroy it forever.

Lady Veronica Elal, captive in her tower, has only one way out. To her bitter disappointment, she will never be a wizard. Instead, through a twist of fate, and despite her expensive Convocation Academy education, Nic is doomed to be a familiar like her mother. Forced to participate in the Betrothal Trials, she receives a wizard suitor for one night each month. Whichever man impregnates her will bond her to them forever. With no choice but to serve the one who wins her, Nic has one hope for control over her life: a wizard she can manipulate.

Gabriel Phel seems like the perfect choice for Nic’s gambit—he’s desperate and untutored in wizardry—but within moments of meeting him, she feels the bonds of magic tying them together. Afraid of losing her will to the compelling wizard who touches her heart like no other, Nic does the unthinkable: she runs. Pregnant and alone, Nic eludes monstrous hunters, searching for a safe haven. But when Gabriel catches up to her, their adventure has only begun.
Available ebook formats: epub
Price: $5.99 USD
Buy Add to Library Give as a Gift
How gifting works
Create Widget
Tags: magic familiar magic fantasy wizard fantasy magic wizards magic battles wizard academy
About Jeffe Kennedy

About the Series: Bonds of Magic

Also in Series: Bonds of Magic

You have subscribed to Smashwords Alerts new release notifications for Jeffe Kennedy.