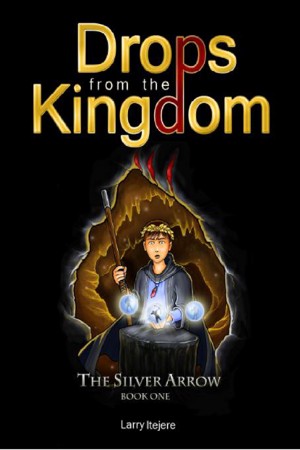 Larry is a Teen/Young adult fantasy writer. His debut novel The Silver Arrow is his first in the Drops from the Kingdom series. His books are written for children who do not always want to pick up a book and read.
In his work of fiction, Larry's guiding principles are that his novels are clean and fun, with enough action adventure to keep young readers wanting more.
Born in England, some of his fond memories are those he spent working with his father in their garden. As he shared, old fictional tales that continue to influenced his own style of storytelling.
Larry left England and moved to the United States and currently lives in North Carolina with his wife and children.

Book One : Trailer
Drops from the Kingdom: The Silver Arrow

About the Series: Drops from the Kingdom

The new action adventure novel that follows the life of Iseac as he travels around the four kingdom in seach of the three that could help him stop an impending war.

Also in Series: Drops from the Kingdom

I read The Silver Arrow because I wanted to experience a book written for young adults. I read books and watch movies to be entertained. I was very pleasantly surprised after reading Larry Itejere's book. I wouldn't limit this book to young adult no more than I would limit Orson Scott Card's Ender's Game to an adult book. As I read the story, it just kept getting better and better. Larry let the story unfold in a perfect pace. Lots of action, tension, and a perfect mix of description. I have read some books that spent pages describing a scene and in doing so the story became lost to the reader... not Larry. It was the perfect blend of action and scene description. Once I started, I didn't want to stop reading- that's the sign of a good book. I would highly recommend The Silver Arrow for both young adults and adults alike.

Don't let the cover fool you, it looks more like a book for younger people, but I found the story very detailed and it kept the mind working. It was in no way a boring at all. It was very fast paced.

As a young boy he has a dream that plagues him, his father then helps him discover what the dream means and what his destiny will be.

My only negative comment would be that in some areas added information could be used to make sure the reader knows what is happening.

I reviewed this book the day that I got it. At first it started out kind of slow but the pace stepped up abit and I really enjoyed it. I would recommend this book to everyone.

Iseac and Samuel are two boys who don't plan on doing more than being just boys, however destiny has other plans. Iseac is his generation's Anamerian. His task is to find three people who will will help determine the out come of a great war with the Gaid'dum. Once the Gaid'dum was simply a curious boy like Iseac and Samuel, but after touching one of the sacred scrolls, he has become something of great evil. Looking only to conquer the kingdoms and take control of the rest of the sacred scrolls. Samuel is quietly enjoying his own life, when his town in attacked. His entire family is either slaughtered or captured by the Gaid'dum's army. While trying to find a way to save his mother and remaining brother his path crosses Iseac's and his life's course is altered forever.

I'm caught in the middle on this book. On one hand I love the story. Itejere's world he has created, with it's different kingdoms and various people, is very intriguing. His characters seemed solid in how they were written and didn't jump all over the place. In fact I really enjoyed the story and how he brought Iseac and Samuel's separate stories together. In fact there were some unexpected but interesting twists along the way. I would definitely be interested in reading the next book in the series and finding out what else happens to Iseac and Samuel, and who survives the war.

This novel was difficult for me to understand and get into due to the various spelling and grammar mistakes.

I read my books on a kindle using the text-to-speech feature and having excellent grammar and spelling in a novel when using this feature is essential. This meant that I was unable to finish the novel because it was too difficult to follow the story.

You have subscribed to alerts for Larry Itejere.

You have been added to Larry Itejere's favorite list.

You can also sign-up to receive email notifications whenever Larry Itejere releases a new book.