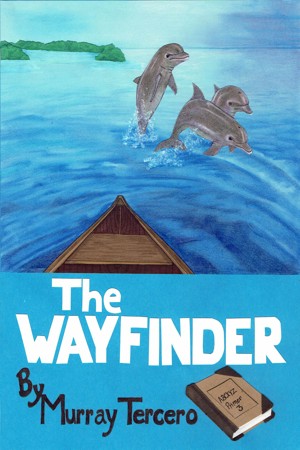 By Murray Tercero
The Wayfinder is the final book in this first time author's trilogy. Abby sixes demonstrates her skills in voyaging without modern instrumentation by using only natural elements and observational ability. Dolphins, pirates, a typhoon, shipwreck, and frigate birds contribute to the timeline of her retrieval of a bin of history. The story ends with death and honor and love overcoming the impossible. More
The Wayfinder is the final installment in this first time author's trilogy. Abby Sixes is the sixteen year old girl from many lands who agrees to recover a hidden bin of important papers that her grandparents had buried in 1976 on a remote island in Micronesia. At the time, it was a reasonable idea for a newly married teenage couple about to leave the Pacific islands for a new life. After four decades, it seemed unlikely that it could be done. For Abby, this means calling upon her survival skills as a wayfinder- someone trained to voyage by sun, moon, stars, wind and wave patterns, sea life, and bird migration without modern instrumentation. She had already faced her great dread in returning to Yap Island to meet Bi'gel M'uw. She thought she had killed him in an accident when she was twelve years old, but found out in the second book that not only was he still alive, but had built a beautiful sailing canoe for her to use for her voyages. The story chronicles her journey and the events that makes it life changing. Dolphins, pirates, a typhoon, shipwreck, and frigate birds all contribute to the timeline. The finding of the bin and the dilemma of what to do with it is not the climax. It is the news of Bi'gel's death and the funeral procession that was supposed to end the story that opens the door for an interesting future.
Available ebook formats: epub mobi pdf lrf pdb txt html
First 30% Sample: epub mobi (Kindle) lrf more Online Reader
pdb
Price: $1.99 USD
Buy Add to Library Give as a Gift
How gifting works
Create Widget
Tags: funeral rite canoe voyage world history micronesia girl adventure yap seabirds dolphin pilots wayfinding chuuk
About Murray Tercero

Murray is the third male named Murray in his recent family tree. Tercero means "third" in Spanish and is a language he has halfway learned since junior high school. Murray has lived in many parts of the United States from Florida to Alaska and Maryland to California. He has met people from the places he mentions in the story and has been intensely interested in learning to speak other languages only to end up learning about the culture and failing to retain the language. Murray is of one racial background, married a woman of another racial background, has one son of mixed race, and is soon expecting his first grandchild. This background and his personal interests in cultures, travels, and people provide the story lines for his characters. He is part Edudi in grandfatherly outlook and part Abby in his sense of adventure. Abby is an ongoing fictional granddaughter whom he would have empowered in every way possible had she really existed. There are two other stories soon to be published.

The Trauma
The Wayfinder

Many more are waiting to be released from his imagination but this trilogy represents his first venture into publishing. Abby is his fictional grandchild but represents the best of many of the children he has met and spent valuable time with. Murray has lived in the Portland, Oregon area since 1998.

You have subscribed to alerts for Murray Tercero.

You have been added to Murray Tercero's favorite list.

You can also sign-up to receive email notifications whenever Murray Tercero releases a new book.