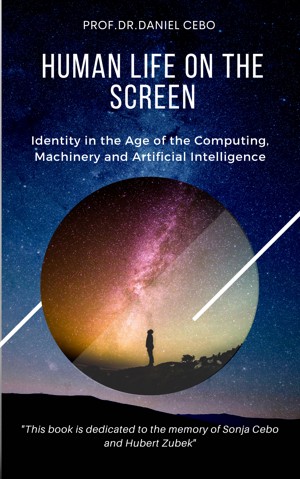 Human Life on the Screen: Identity in the Age of the Computing, Machinery and Artificial Intelligence

By Prof.Dr.Daniel Cebo
The book is concerned with key aspects on identity of the human. Principally, the author motivates to tackle this aporia standing on the perspective of digital social science at once. This book concentrates on how digital social science should devote to considering the nature of identity of the human-being and what the human-being is in terms of both advanced technologies and social sciences. More
The fascinated concerns with the AI and big data have been growing in these days. Over the past few years, a considerable number of industrial and business solutions have been already conducted in these areas. It is called either the AI or big-data revolution. In light of the technological paradigm shift since the beginning of the human history, occasionally, there were innumerable times being opened novel views to enlighten next steps for us in the past. Reminiscently, industrial revolution, personal computer boom, internet’ tremendous upheaval, and smarter mobile phones’ solutions were good examples. Such technologies had innovated on our life.
Human enhancement technologies is a bold and ambitious project that brings together leaders in the fields of science, technology and theology to examine some of the key elements that contribute to human flourishing. The aim of this research is to explore the theological, social and philosophical implications of recent developments in robotics and AI science-technology for secular and religious understandings of human nature and identity. Of particular interest and concern is the development of humanoid robots whose appearance, motor behaviour and responsiveness are becoming virtually indistinguishable from human beings. In addition, new technical developments provide increasingly realistic simulation by AIs of human compassion, empathy and emotional intelligence. These developments raise urgent and profound questions and challenges for human self-understanding.
This book articulated the nature of identity of the human comparing with the AI and big data in the digitized society. The goal of this book was to argue this issue by comprehensive investigations. It firstly reviewed contemporary conditions based on advanced technological tendencies, and it further unveiled social mechanisms on identity of the humankind in depth. For the digitized social era, the author discussed that it should firstly consider the ethical rules of conduct and the ways of control for the human-being rather than the AI. Of course, there are requirements on necessary regulations and ethical framework for the AI and big data. For future investigations and discussions in digital social science, an identity issue would be repeatedly examined in reflexive perspectives.
Each chapter from this book has been respectively discussed. Finally, taken together, the author may be permitted to generally discuss a little bit freely for further considerations. As it seemed likewise Cartesian, the author firstly defined preconditions for identity of the humankind subdivided the whole problems on recent technological matters to necessary parts and discussed each issue in depth. In this chapter, the author further contemplates those components from another angle for reconstructions, which should be integrated for understanding and reasoning some significant variations on proceeding future patterns.
Available ebook formats: epub mobi pdf lrf pdb txt html
First 20% Sample: epub mobi (Kindle) lrf more Online Reader
pdb
You set the price! USD
Buy Add to Library Give as a Gift
How gifting works
Create Widget
Tags: artificial intelligence human dignity human humanoids immortality cyborg human nature enhancement digital future immortal being
About Prof.Dr.Daniel Cebo

Prof. Dr. Daniel Cebo is a skeptical and controversial scientist who thinks deeply about our emerging technological future. He was born in 1978 in Sarajevo and grew up in Belgrade,where he studied molecular biology and physiology at the University of Belgrade. During 2005 he left Serbia to Germany where he obtained PhD at University of Freiburg. Following his doctorate in 2010, Daniel accepted a position as a research assistant and later as a principal scientist at Free University of Berlin. During that time, he developed a research interest in investigation of stem cells and community-based research, particularly in global healthcare treats and substance abuse. He is currently an independent researcher and honorary professor with interests in the fields of science, technology and health, with current special interests in synthetic biology, robotics, artificial intelligence and the future of humans. He believes that moving into a new phase of human evolution requires a scientific and technological revolution combined with the substantial spiritual changes that are closely interlinked, complementary and mutually supportive. That type of research is his life interest. He argues about the humanity future because it is believable that the long-term outcomes for our civilization depend sensitively on how we handle the initiation of specific human-machine transformative and digital capabilities

You have subscribed to alerts for Prof.Dr.Daniel Cebo.

You can also sign-up to receive email notifications whenever Prof.Dr.Daniel Cebo releases a new book.