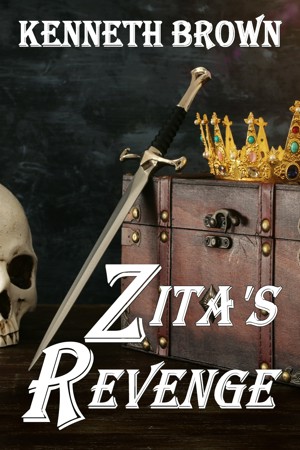 By Kenneth Brown
Zita watched as the magic fireball killed her father on Velidred Volcano during the eclipse. She now wants revenge on the boys from Earth for their role in her father's death.

Erik and Alpherge, boys from Earth, search for a magical golden crown to gain the power necessary to release the curse of the Stone Warriors. To succeed in their great quest they must travel to the Pit of Wretchedness. More
Zita watched as the magic fireball killed her father on Velidred Volcano during the eclipse. She now wants revenge on the boys from Earth for their role in her father's death. She teams up with powerful businessman, Gadiel, to help her, but he has extraordinary powers she didn't foresee.

Erik and Alpherge, the boys from Earth, seek out a magical golden crown in an attempt to gain the power necessary to release the curse of the Stone Warriors. To succeed in their great quest they must travel to the Pit of Wretchedness. The journey is more than they expect and will test their skills and resolve.
Available ebook formats: epub mobi lrf pdb html
First 10% Sample: epub mobi (Kindle) lrf more Online Reader
pdb
Price: $4.99 USD
Buy Add to Library Give as a Gift
How gifting works
Create Widget
Tags: adventure fantasy fantasy series teen fantasy ya fantasy fantasy epic action fantasy ya adventure fantasy teen adventure ya
About Kenneth Brown

Ken Brown is an application web developer by day and author by night.

Over the years he has written short stories for his own enjoyment and started a couple of other books, but never had the fortitude to finish the books. Ken found himself distracted by work, family and other business ideas that he thought were more important than writing.

But one day an idea came to him about a boy who wants to rescue a girl and finds that going through a cave he is transported to another planet. A planet where magic is real and the dangers of wild animals, strange people and bizarre customs are just as real.

The book was inspired by a photograph Ken found on the Glacier National Park's website. A simple photograph of the photographer standing in a tunnel in winter in Glacier National Park, Montana. The image showed icicles hanging from the tunnel exit with large boulders hugging the wall behind. Looking at the boulders and rocks, Ken saw images of people, horses and a story developed of a boy searching out the Mountain King.

A dream started to turn this fanciful world into a book and it led three years later to Ken's first published novel Eclipse of the Triple Moons.

About the Series: The Mountain King

Four teens enter a portal on Earth that takes them to the planet Aloheno. They find themselves trapped, but also realize they have magic and healing powers not available on Earth. They search for a way to open the portal to return home and find themselves beset with obstacles and people that want to kill them. Fantasy - Action Adventure.

Also in Series: The Mountain King

You have subscribed to Smashwords Alerts new release notifications for Kenneth Brown.

You have been added to Kenneth Brown's favorite list.

You can also sign-up to receive email notifications whenever Kenneth Brown releases a new book.