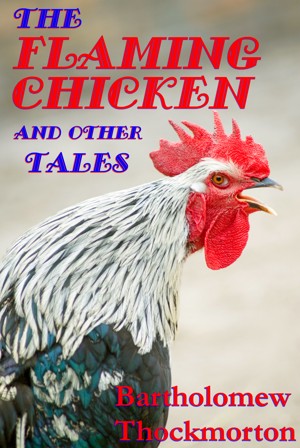 The Flaming Chicken and other Tales

Bartholomew James Thockmorton was born shortly after World War II in the burly, rural environs outside of Antsiranana. His ancestral family owned one of the larger cassava plantations, which his father managed. A small army of poor, itinerate laborers worked the fields and walked the cows when necessary. Although his mother was a schoolteacher in a one-room schoolhouse for the kafirs working the plantation, she often closed school and helped with the family business.
Before Bartholomew entered the first grade, his immediate family emigrated to the Americas seeking political asylum during a brief period of political unrest in their home province. Unwilling to enroll her son in a foreign school system, Misses Thockmorton home schooled young Bartholomew, teaching him to read using comic books and by continual recitations off the labels of various and sundry commercial products. This unorthodox methodology is credited to the boy’s almost astounding ability to recall a staggering amount of obscure trivia and minutiae. Additionally, his mother’s use of American television as an inexpensive and trusted babysitter led to the boy’s later talent of usually being the only person in an occupied room that can recall the name of the foreign actor portraying the Cisco Kid (Duncan Renaldo).
When the family returned home, Bartholomew enrolled in an academy for gifted children where he studied particle physics and animal husbandry. On his 18th birthday, he took a menial position aboard a tramp steamer, using it as free and convenient passage to the mother country. Upon arrival, he promptly used his undeserved citizenship to enlist in the Royal Navy, where his strapping physique and precise ability to speak intelligently while using large, unusual words led to his serendipitous assignment to special ops. Subsequently, Lieutenant Thockmorton participated in numerous clandestine campaigns abroad and on a multitude of contentious fronts.
Completing his enlistment, he promptly returned home to assist with the family business. It was during this period, after a night of unrestrained drinking with a group of chums from his military days, that the still young Bartholomew accepted a wager to attempt a crossing of equatorial Africa with nothing more than the first 25-issues of Mark Evaniner’s Groo the Wanderer. Which he did, with splendid aplomb.
After a long and unsuccessful life of struggling to blend with the great, unwashed masses, Master Thockmorton now spends his days in leisure, studying irrelevant and long forgotten scientific abstracts, attempting to master the fine art of authoring tales of hard science fiction and practicing how to triumphantly write in the third-person concerning his life. He lives with his wife in an unimportant and undisclosed location.
Master Thockmorton does not tweet, blog or otherwise manifest his thoughts or beliefs in a personal website, but questions and comments may be directed to:

While communiqués may remain unanswered, they will be read...but only after the spam filter passes judgment on said submissions. 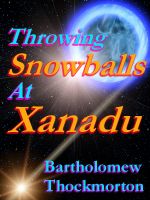 A thoroughly amusing read! I would enjoy reading more (mis)adventures of Bubba and Freddy.

You have subscribed to alerts for Bartholomew Thockmorton.

You have been added to Bartholomew Thockmorton's favorite list.

You can also sign-up to receive email notifications whenever Bartholomew Thockmorton releases a new book.