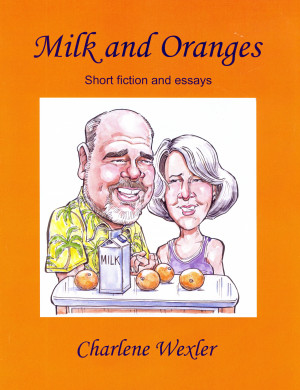 Whether she is tackling fiction or essays, Charlene Wexler writes from the heart. With a keen eye for detail and a way of looking at the world a bit sideways, Wexler’s writings in Milk and Oranges will entertain while they make you think.

In Milk and Oranges, Wexler’s fiction and essays are grouped in five categories.

How’s Your Love Life? features two fiction pieces that will cause female readers to nod their heads in agreement as well as a warm essay on Wexler’s feelings for her husband, Sam.

The Cruel Club features both essays and fiction on the tragedy of the death of a child. Wexler has been a member of the Cruel Club since 1981.

In Family and Friends, you’ll meet some of the fun characters in Wexler’s life and in her fiction, and inevitably you’ll think about similar loved ones in your own world. The story "Milk and Oranges," from which the title of this book is derived, appears in this section.

What would life be without our animal pals? Wexler shares some stories about four-footed friends and loved ones in Animal Magnetism.

The Passing Parade features Wexler’s fiction and prose observations on the changes in our fast-paced world.

After reading Milk and Oranges, you’ll see why Wexler’s first novel, Murder on Skid Row, was honored with a 2010 International Apex Award for Excellence from Communications Concepts, a writing think tank outside Washington, DC. Her style makes you feel as if you are reading about or talking to dear friends.

Milk and Oranges is a collection of stories that will pluck at your heartstrings and tickle your funnybone.

Charlene Wexler is a graduate of the University of Illinois. She has worked as a teacher and dental office bookkeeper and as “a wife, mom, and grandmother,” she said. In recent years, Wexler’s lifelong passion for writing has led her to create numerous essays as well as fiction.

She is the author of the books Lori, Murder Across the Ocean, Murder on Skid Row, and Milk and Oranges.

Her work has appeared in several publications, including North Shore Magazine; the University of Illinois at Chicago College of Dentistry’s Vision magazine; Alpha Omegan magazine; the book and CD Famous Poets of the Heartland: A Treasury of Beloved Family Poems, Talent, OR: Famous Poets Press, 2014; and the Gazette newspaper of Chicago.

Wexler’s first novel, Murder on Skid Row, was published in 2010. It is the story of a double-murder on Chicago’s Skid Row in the 1960s. Murder on Skid Row won an international Apex Award of Excellence from Communications Concepts, a writing think tank outside Washington, DC.

Published as an e-book on Smashwords and as a print edition by Central Park Communications in 2012, Milk and Oranges, is a collection of her short fiction and essays examining life, love, and the tragedy and comedy of the human condition. Whether she is tackling fiction or essays, Wexler writes from the heart. With a keen eye for detail and a way of looking at the world a bit sidewasy, wexler’s writings in Milk and Oranges entertain while they make you think.

Wexler is active with the Alpha Omega Dental Fraternity, the Authors Marketing Group, the Chicago Writers Association, Children’s Memorial Hospital philanthropy, Lungevity (an organization that fights lung cancer), the McHenry Bicycle Club, the Museum of Science and Industry, the National Council of Jewish Women, the Richmond IL Book Club, the Jewish United Fund, and the University of Illinois Alumni Association.

“I have always used writing as therapy,” Wexler said. “Now I have the time and opportunity to pursue it as a career.”

Her advice for other aspiring writers—even grandmothers like herself—is to “follow your dream. You can do it, and it’s never too late.” Charlene is available for writing assignments. E-mail info@charlenewexler.com, or call William S. Bike at ANB Communications at (773) 229-0024.

Reviews of Milk and Oranges by Charlene Wexler

It may be a culture and gender difference, even for a work styled as 'women's fiction, but I found these stories gossipy and ingenuous. I don't believe most women, or women outside a certain limited bourgeoisie would find it especially entertaining. Adventure travel to different cultures and places, and close engagement with a much broader range of personalities would help fill out this writer.

You have subscribed to alerts for Charlene Wexler.

You have been added to Charlene Wexler's favorite list.

You can also sign-up to receive email notifications whenever Charlene Wexler releases a new book.