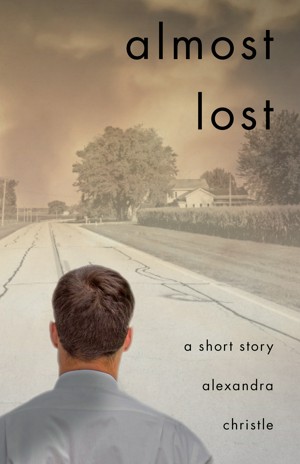 By Alexandra Christle
Bridges of Madison County meets Norma Rae - a prelude to Between Nowhere and Lost.
Lost in the South Carolina countryside, David Drummond is intrigued by the woman who gives him directions...with no idea where those directions will lead him. More
David Drummond is lost. Frustrated, he pulls up to a house with a woman sitting in a porch swing. Surprised by her intellect and gracious hospitality, after he leaves he can't seem to get her off his mind. But his reasons for being in the small town are anything but altruistic, so he pushes her out of his mind...only to find himself entangled in a web of deceit and longing.
Download: epub mobi (Kindle) pdf more Online Reader
lrf pdb txt
Price: Free! USD
Add to Library
Create Widget
Tags: love affair 1960s historical romance racial small southern town
About Alexandra Christle

She has jumped from an airplane, spent the day on a commercial shrimp boat, spent a weekend with a houseful of Navy SEALs, and hitchhiked across 3 states. She has worked for newspapers, taught high school English, and had a lengthy stint as a graphic designer. Raised a son and daughter, scored 3 grandchildren; and written a few books along the way.

You have subscribed to Smashwords Alerts new release notifications for Alexandra Christle.