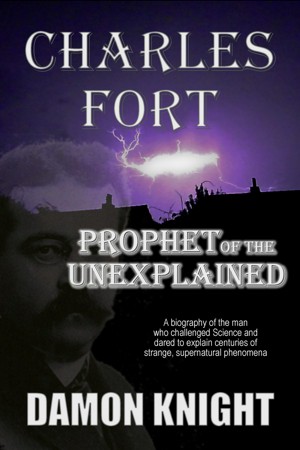 Charles Fort: Prophet of the Unexplained

By Damon Knight
*With an introduction by R. Buckminster Fuller.*

Charles Fort devoted his life to attacking one of the modern world's most sacred cows: traditional science, with all its authority and all its presuppositions. More
*With an introduction by R. Buckminster Fuller.*

Charles Fort devoted his life to attacking one of the modern world's most sacred cows: traditional science, with all its authority and all its presuppositions. His method was simple: he collected and published reliable accounts of events that science cannot explain--colored rains, living things such as frogs falling to earth, unknown objects in space and in the oceans, people who have mysteriously appeared and disappeared, and a whole catalogue of other curiosities. His boldness, imagination and conviction earned him the admiration of many of his most famous contemporaries, including Theodore Dreiser, Ben Hecht, Alexander Woollcott, and Oliver Wendell Holmes. Even today scientists explore the implications of Fortean material.

This book is the first full-scale biography of Charles Fort, a lively, sympathetic, and thought-provoking portrait of a strange and brilliant man.

"Every science is a mutilated octopus. If its tentacles were not clipped to stumps, it would feel its way into disturbing contacts." So Charles Fort wrote and so he believed. And out of this believe came--_The Book of the Damned, Lo!, New Lands, Wild Talents_--books filled with highly credible reports of events that the octopus sought to avoid: red snows, blue rains, and showers of dead leaves in April; heavenly bodies, individuals, and even entire races disappearing without a trace; wheels of light in the ocean, unfamiliar objects in the sky, and invisible forces in his own apartment.

Reviews of Charles Fort: Prophet of the Unexplained by Damon Knight

You have subscribed to Smashwords Alerts new release notifications for Damon Knight.