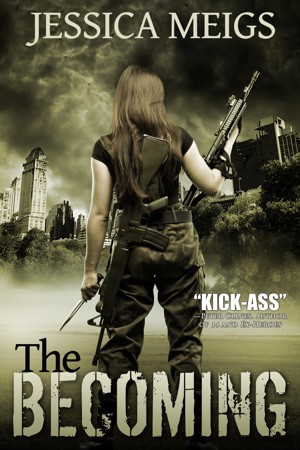 By Jessica Meigs
Rated 4.50/5 based on 2 reviews
The Michaluk Virus has escaped the CDC, and its effects are widespread and devastating. Most of the population of the southeastern United States have become homicidal cannibals. As society rapidly crumbles under the hordes of infected, three people--Ethan, a Memphis police officer; Cade, his best friend; and Brandt, a lieutenant in the US Marines--band together against the oncoming crush of death. More
* One of Barnes & Noble Book Blog's Top 20 Zombie Novels of the Decade! *

The Michaluk Virus is loose.

In the heart of Atlanta, Georgia, the Michaluk Virus has escaped the CDC, and its effects are widespread and devastating. Most of the population of the southeastern United States have become homicidal cannibals. As society rapidly crumbles under the hordes of infected, three people—Ethan Bennett, a Memphis police officer; Cade Alton, his best friend and former IDF sharpshooter; and Brandt Evans, a lieutenant in the US Marines—band together against the oncoming crush of death and terror sweeping across the world.

As Cade, Brandt, and Ethan hole up in a safe house in Tupelo, others begin to join them in their bid for survival. When the infected attack and they’re forced to flee, one departs to Memphis in search of answers while the others escape south to Biloxi, where they encounter more danger than they bargained for. And in Memphis, the answers that one man finds are the last answers he wanted, answers that herald a horrific possibility that there may be more to this virus than first suspected.

“I can’t wait for part 2 to be released … it’s definitely an entertaining must read. Great job Jessica--two CrackBerry thumbs up!”--CrackBerry.com

“From the chilling opening scenes to the tension-filled climax, Jessica Meigs has crafted a story that reminded me that zombies are really scary.”--Kevin J. Burke, author of THE LAST MAILMAN

Also in Series: The Becoming

4 1/2 Stars. I love Zombie books and really enjoyed this one. Looking forward to the next 2 in the trilogy. Great Job Jessica!

The Becoming was a thrill ride from start to finish. If you’re a fan of apocalyptic zombie stories, then you absolutely can not miss this one! Jessica Meigs has crafted a fast-paced and suspense-filled story with characters that are likable even when they’re not behaving in a very likable manner. Cade, the lead female character is a badass with a heart – a former Israeli soldier whose skills with weapons are unsurpassed. She reminds me a bit of Sigourney Weaver’s Ripley character in the Aliens movies…if Ripley were an Israeli sharpshooter. She’s tough and lethal but still very human and capable of emotion; characteristics which the author portrays with great success. The story begins with Cade and her best friend Ethan essentially running for their lives in a world suddenly gone mad. As new characters are introduced, the dynamics of the group continually evolve, just as they would if the situation were real.

The author has blended the traditional flesh-eating zombie scenario with a few new twists that are unique to this story. I found Meigs’ zombies much more terrifying than the traditional type because they appear to have a certain level of intelligence and the ability to organize and strategize. They are bloodthirsty hunters who stalk their prey in packs before moving in for the kill.

The other terrifying thing about this story is that it’s not an entirely impossible scenario. The disaster unfolds when a deadly virus escapes from the CDC in Atlanta. The Regenerative Psychotic Virus transforms its victims into psychotic cannibals. The regenerative part is hinted at throughout the story but any avid zombie fan can figure out what it means: The virus regenerates victims to the extent that they don’t stay dead when they logically should be. Voila! The result is some of the scariest zombies ever to stalk a post-apocalyptic world.

My only disappointment was the abrupt manner in which the book ended. However, knowing that this is just book one and the second volume is waiting in the wings, it’s just a temporary setback. I will wait eagerly for books two and three because I get the feeling after reading The Becoming that things are just starting to heat up!

You have subscribed to alerts for Jessica Meigs.

You have been added to Jessica Meigs's favorite list.

You can also sign-up to receive email notifications whenever Jessica Meigs releases a new book.