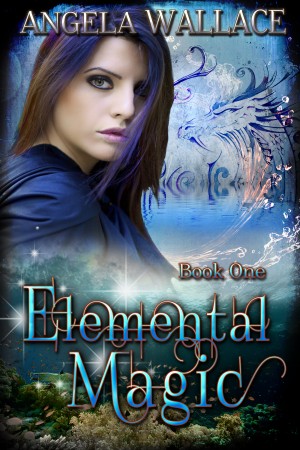 By Angela Wallace
Rated 3.83/5 based on 6 reviews
Aileen Donovan wants nothing more than recognition as a scientist by her supernatural community. What better way to do that than to solve a mystery involving a power-hungry alchemist, hallucinogenic coral, and a homicidal sea dragon? The hard part will be working with Coast Guard officer Colin Benson—until the tides turn, and Aileen realizes that love and duty may not be mutually exclusive. More
Aileen Donovan is an oceanographer with magical control over the element of water. While her normal focus is on research and fighting poachers, she’s about to go up against the stuff of legends—and that’s saying something for a supernatural.

A transport ship is missing and everyone’s eager to get their hands on the cargo. No one knows what exactly it is, but when fragments resembling coral begin to drive local residents insane, Aileen suspects a preternatural source. Whatever is at the bottom of the ocean, a power-hungry alchemist wants it, and releases a sea dragon to eat the competition—literally.

Aileen sees this as an opportunity to win the professional recognition she desires, but keeping secrets is complicated when she’s working with local Coast Guard officer Colin Benson. Her sense of love and duty will be put to the test, and when the tide washes out, it might have been better if that lost ship had stayed lost.
Available ebook formats: epub mobi pdf html
First 20% Sample: epub mobi (Kindle) Online Reader
Price: $3.99 USD
Buy Add to Library Give as a Gift
How gifting works
Create Widget
Tags: romance urban fantasy mystery supernatural elementals
About Angela Wallace

Angela Wallace has been penning adventures ever since she was sucked through a magical portal as a child. What she saw and whom she met gave birth to exciting and complex fantasy worlds where defying the laws of physics was a bonus. She has since come back down to earth, only to discover this mortal realm has magic of its own. Now she is quite at home in the world of urban fantasy, though believes that love, faith, and hope are of a stronger magic than fire wielding and sorcery. She loves gun-toting good boys, and could have been a cop in another life except real blood makes her queasy. She’ll have to stick to solving supernatural mysteries. Language is her pleasure, whether it’s weaving words on a page or lassoing linguistics into translations as a sign language interpreter.

Review
Monica-Marie Vincent reviewed on May 31, 2012

From the moment I started this book, I was swept up in a tidal wave of the story. Angela Wallace's Elemental world was easy to lose myself in because she made it such an integral part of this world we currently live in. I can't wait to read the sequel Dry Spell when it comes out this summer! I say pack your boats to get in on this story!

Never got to read. Could not get it to download to my kindle :(

I loved this book, and was able to finish it in two days. I couldn't stop reading. I have told my friends about this book and I am waiting to find out for they think about it.

I loved this story. It kept me on the edge so I had to sit and read it in one sitting. I just wanted more. It had it all from Sea Dragons, to Water Elements, to bad guys to who done it...etc. I can't wait for her next book to come out. It was really great. The love aspect was also nice. All clean and ready for any age group.

Not usually a reader of paranormal romance/urban fantasy fiction, I picked this one up because I'm a huge fan of Angela's blog, and knew that if her writing there was anything to go by, then this would be well worth the read. I wasn't disappointed.

With likeable characters, a kick ass story line, and well-written prose, it was hard to put down. The book had me in suspense from the get-go and I now wait in anticipation of the rest of the books in the series.

I'd go more around 2.5 stars really, I find this one a little difficult to rate and I'm giving the benefit of the doubt, so to speak.

I picked up the sample of this from Smashwords and was intrigued more or less despite myself, so I put it on my "too read" list as much because it seemed a little outside my normal reading as anything.

Our heroine is Aileen Undina, one of an elite group of people with the power to control one of the four elements; in her case it's water. She is not a "kick-ass female" so if you prefer your female leads to be able to take on the world without breaking a sweat, don't go here. Aileen is insecure, something of a romantic, certainly a workaholic, and typically oblivious to the attentions of Colin, the hunky Coast Guard who we all know she'll be solidly in love with by the end of the book, even if she isn't. I guess Elemental Magic falls into the paranormal romance category, but there is enough "action" plot in there to keep one interested even if you find romance a bit boring.

My problem with Aileen early on in the book was her tendency to get into trouble she could have avoided by not keeping secrets she had no real reason to keep. She's a scientist, an oceanographer, and dedicated to that, but her reasoning goes right out the window as soon as things get a little odd. It seemed like a plot device rather than realistic behaviour, especially since she hated keeping these secrets from people she had no reason to. Once she got over this things got a fair bit smoother. The McGuffin for the story did not seem to operate entirely logically either; that could be just me.

The copy I read included a sample of the next of Ms Wallace's books, Dry Spell. I'll be looking out for it. With the introductions out of the way, I'd like to see a good plot married to interesting character development, and that's often easier in the later books in a series. The teaser certainly had an interesting punchline (even if, given the title, I can almost see the plot from here).

All in all, not bad, certainly better than I might have imagined, but not quite as good as I feel was possible.

You have subscribed to alerts for Angela Wallace.

You have been added to Angela Wallace's favorite list.

You can also sign-up to receive email notifications whenever Angela Wallace releases a new book.