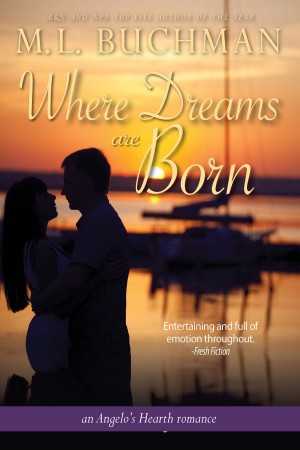 Where Dreams Are Born

By M. L. Buchman
Two identical gifts, a calendar of Pacific Northwest lighthouses, launches two people on journeys that will set the course of their lives and their hearts...if only they could stand each other. More
-“I became completely immersed in this story and it had me at page one.” – Fresh Fiction

Cassidy Knowles, the nation’s fastest rising food-and-wine critic. Her father, a small-scale vintner, leaves a final gift: a calendar of Pacific Northwest lighthouses, a dozen thin letters, and a deathbed promise to visit one each month. She can handle that.

Russell Morgan, #28 on the latest “most eligible” list and the last guy on the planet Cassidy wants. Fine with him. She’s an over-privileged little twit. He sets his own course by a friend’s calendar of lighthouses. A sailing voyage that guides him to the one woman in all Seattle who irritates him the most.

Where can two hearts chart the same course? Where Dreams Are Born in the warmth around Angelo’s Hearth.

M. L. Buchman has over 40 novels in print. His military romantic suspense books have been named Barnes & Noble and NPR “Top 5 of the year” and twice Booklist “Top 10 of the Year,” placing two titles on their “Top 101 Romances of the Last 10 Years” list. He has been nominated for the Reviewer’s Choice Award for “Top 10 Romantic Suspense of 2014” by RT Book Reviews. In addition to romance, he also writes thrillers, fantasy, and science fiction.

In among his career as a corporate project manager he has: rebuilt and single-handed a fifty-foot sailboat, both flown and jumped out of airplanes, designed and built two houses, and bicycled solo around the world.

He is now making his living as a full-time writer on the Oregon Coast with his beloved wife and is constantly amazed at what you can do with a degree in Geophysics. You may keep up with his writing by subscribing to his newsletter at www.mlbuchman.com.

About the Series: Angelo's Hearth

Dreams occur for every woman, but when three college friends rekindle their relationship a decade later, they never expected the dreams to start coming true. Set in the splendid outdoors of Washington state's Puget Sound, and in the cozy corners of Seattle's Pike Place Market.

You have subscribed to alerts for M. L. Buchman.

You have been added to M. L. Buchman's favorite list.

You can also sign-up to receive email notifications whenever M. L. Buchman releases a new book.