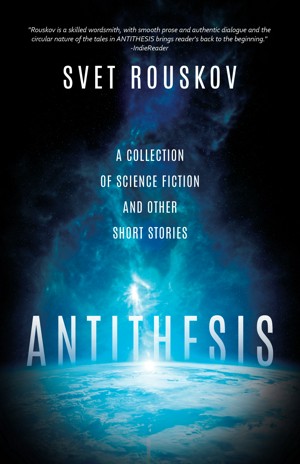 Antithesis: A Collection of Science Fiction and Other Short Stories

A speculative tale about humankind becoming obsolete from the perspective of the machines we created. The story of an airline pilot who loses his faith in the physics of flying as his rational and irrational mind fight for dominance. An ancient being born of human evolution that strips us of our memories, feeding on one precious reminiscence at a time. An audacious fable that explores a new galaxy, one where humans are irrelevant, but the conflicts of a class-based society are not. A novella-length saga about a mission to Mars, the origins of humanity, and an atrocity that stretches across time and space. And finally, a story that asks the question whether an unstoppable artificial intelligence would indeed be happier traveling the vast reaches of space, or back amongst the flawed beings who created it.

Escape into worlds unlike anything you have seen before, but some eerily similar to our own. Antithesis – where the opposite is to be expected.
Available ebook formats: epub
Price: $3.99 USD
Buy Add to Library Give as a Gift
How gifting works
Create Widget
Tags: short story science fiction space alien galaxy
About Svet Rouskov

Svet Rouskov started his career as a graduate from the University of Toronto Mechanical Engineering program and became a successful automotive industry executive. After fifteen years he discovered that his real passion was writing. Once he took an introductory screenwriting class, Svet realized he was hooked and continued his filmmaking education at Norman Jewison's Canadian Film Centre. Since that time, Svet has written, developed, and produced feature films, television shows, video games, and web-based series. His passion for writing has now extended to literature, which offers him another exciting avenue to tell stories. This is Svet's first work of fiction.

Please check out his IMDb page for details of his work and representative contact information.

Reviews of Antithesis: A Collection of Science Fiction and Other Short Stories by Svet Rouskov

You have subscribed to Smashwords Alerts new release notifications for Svet Rouskov.

You have been added to Svet Rouskov's favorite list.

You can also sign-up to receive email notifications whenever Svet Rouskov releases a new book.