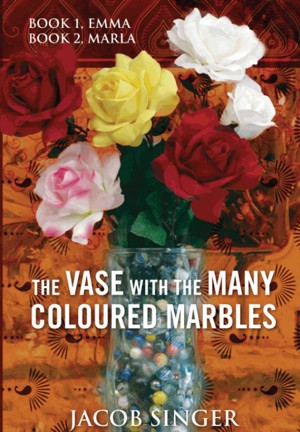 The VASE with the MANY COLOURED MARBLES

By Jacob Singer
The name of Nelson Mandela is familiar to many, as a warrior against the injustices of apartheid in South Africa. But there were many South Africans who worked just as hard to break the power of the Verwoerd Government who were not members of the Black African community, but were Whites, Coloureds and Indians, both English and Afrikaans speaking. This book a story about a few of those people. More
BOOK 1. EMMA
My brief summary of the book is... The book is about a young Coloured girl, Emily Kleintjies challenging the apartheid political system of South Africa. She marries a European man, and has a daughter. Marla.
She becomes involved in fighting the Apartheid system with the help of a friend, Charlie Stuart. She is threatened by the Security Police who inform her that they will no longer ‘provide protection for you or your family,’ and then poison her dog, Gamboo.

BOOK 2 . MARLA
Marla growing up as a European in a town called Potchefstroom, is encouraged by Emma to ‘make as many friends among the Afrikaans community as you can. The only way to overcome apartheid is from within, not direct confrontation.’
Marla fights the Hendrik Verwoerd apartheid system as a University student. She only learns towards the end of the book that her mother's family are Coloured.

The target readership is... Anyone and everyone interested in the Political system of South Africa during the apartheid era, and life in South Africa, during that era.

My name is Jacob Singer. 90% of the story in the book is based on actual events, that I have observed during my life in South Africa and England.

JACOB ASHER SINGER WAS BORN in 1935 in a small town west of Johannesburg, in South Africa. After attending school at the Potchefstroom High School for Boys, he studied Pharmacy at the Chelsea Polytechnic in London, England.

In 1960, he married Evelyn Jackson, and practiced successfully as a pharmacist for the next 25 years, retiring in 1985 and emigrating to Canada in December 1992.

His first book, BRAKENSTROOM, is a book of short stories about Potchefstroom, the town he grew up in as a boy, and where he and his family lived for many years. It is available from Amazon as an eBook and a soft cover.

His second book, THE VASE WITH THE MANY COLOURED MARBLES is a story about a young girl he met when he was 15 years old. Years later he met her mother, and one day, in a fit of confidence, she told him her story, but made him promise that he would only publish it after she had passed away, and then only with her daughter's permission. The book is now available from Amazon as an eBook and a soft cover.

The story is based on true life experiences and people he knew in Potchefstroom. “There are so many stories to tell about South Africa” he says. “South Africa is a beautiful country, with a fascinating although controversial history. Unfortunately with the increase in criminal activity and tardiness in controlling violence it is rapidly falling into the ‘Africa trap.’

Jacob was never politically active, but he personally met and knew many of the active players on both sides of the political fence. When threatened by the security police for not giving them certain confidential information, he encouraged his children to emigrate, and joined them in Canada once they had established themselves.

You have subscribed to alerts for Jacob Singer.

You have been added to Jacob Singer's favorite list.

You can also sign-up to receive email notifications whenever Jacob Singer releases a new book.