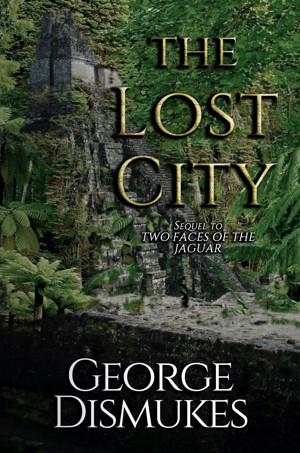 By George Dismukes
How does someone deal with an enraged 2,000 year old Mayan spirit? Brandon and Andrea must find out, an odyssey that returns them to the deepest, darkest recesses of The Mosquitia Jungle with Naja, Brandon’s 300 pound black jaguar, at their side.
Available ebook formats: epub
Price: $4.99 USD
Buy Add to Library Give as a Gift
How gifting works
Create Widget
Tags: romance adventure action jungle secrets jaguar
About George Dismukes

GEORGE DISMUKES spent the first half of his life in pursuit of adventure. This ranged from bullfighting as a youth to milking poisonous snakes professionally at Ross Allen’s Reptile Institute in Silver Springs, Florida. The early 60s found him chasing wild animals across the Serengeti in the movie business and operating an animal export company in Iquitos, Peru.

He spent many years exploring archaeological sites of the ancient Maya Indians in Central America and studying their lost civilization. He also lived in Honduras, where the story, TWO FACES OF THE JAGUAR takes place.
In 1980, he began a video production company in Houston, Texas and worked as a ’triple threat’

(writer/director/producer) creating some of the Houston market’s most creative television commercials. He won a CLEO award for his production of a series of television PSAs concerning prevention of child abuse, funded through a grant from the University of Houston.

Currently, he lives on the Texas Coast with his soul mate and closest friend, Nadine, where he writes and works in magazine advertising.

His hobbies include growing exotic chili peppers and experimenting with salsa recipes. Above all, George is a devout animal lover and has two dogs, named Pulga and Gizmo, respectively.

About the Series: The Face of the Jaguar

Also in Series: The Face of the Jaguar

Reviews of The Lost City by George Dismukes

You have subscribed to alerts for George Dismukes.

You have been added to George Dismukes's favorite list.

You can also sign-up to receive email notifications whenever George Dismukes releases a new book.