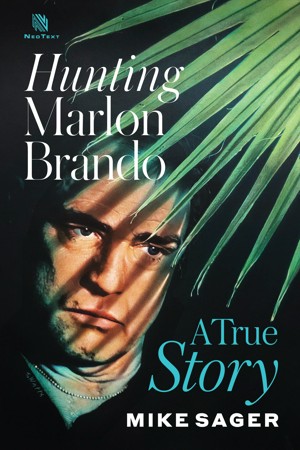 By Mike Sager
From the start, it sounds ridiculous: Go to Tahiti and find Marlon Brando.

But the worldwide search for the legendary star of such classic movies as The Godfather and Apocalypse Now soon becomes an obsession. A totally true tale of tropical adventure, Hollywood superstardom . . . and a beautiful Tahitian translator, who puts Sager’s mission in jeopardy when she suddenly disappears. More
From the start it sounds ridiculous: Go to Tahiti and find Marlon Brando.

But the worldwide search for the legendary Method actor, the star of such classic movies as The Godfather, Apocalypse Now, On the Waterfront, and Mutiny on the Bounty, soon becomes an obsession. The story of one man’s coming of age.

When we first meet him, Sager is 30 years old, divorce pending, no longer the youngest in the room. Winter is coming. His prospects are dim. After ten years as a journalist, he knows it’s time to raise his game. He needs to write something big and important and lasting. Something epic. Something meaningful. Something to seal his reputation.

As it is, the new editor of the Washington Post Magazine suggests an all-expenses-paid search for the most elusive actor of the times—starting at his south seas hideaway, a private atoll off the coast of Tahiti.

Even though Brando famously hates the press and has refused for years to grant any interviews, Sager takes the job.
Wouldn’t you?

Brando’s work as an actor paved the way for generations to follow, as did his commitment to social activism. And he is credited with breaking the stereotype of the stoic, inch-deep, flawless American hero in favor of a distinct new template for American manhood—flawed, mercurial, quixotic, tough but tender.

Sager’s story of his worldwide hunt for the iconic actor is a totally true tale of far-flung travel, grandiose schemes, tropical adventure, Hollywood superstardom . . . and a beautiful Tahitian translator, who puts Sager’s mission in jeopardy when she suddenly disappears. A classic piece first published in 1987, completely re-written and up-dated with over 40,000 words of new material. As it turned out, Hunting Marlon Brando altered the entire course of his life.

With an afterword by Walt Harrington.

“You have to dare to be bad in this world of ours, you have to try stuff, you might have to fail. One thing is certain: If you do what you always do, it’s guaranteed to turn out the same.” —From Hunting Marlon Brando
Available ebook formats: epub
Price: $4.99 USD
Buy Add to Library Give as a Gift
How gifting works
Create Widget
Tags: hollywood adventure movies tahiti the godfather method acting on the waterfront celebrity activism streetcar named desire the wild one
About Mike Sager

Mike Sager is a best-selling author and award-winning reporter. A former Washington Post staff writer under Watergate investigator Bob Woodward, he worked closely, during his years as a contributing editor to Rolling Stone, with gonzo journalist Hunter S. Thompson. Sager is the author of more than a dozen books, including anthologies, novels, e-singles, a biography, and university textbooks. He has served for more than three decades as a writer for Esquire. In 2010 he won the National Magazine Award for profile writing. Several of his stories have inspired films and documentaries, including Boogie Nights, with Mark Wahlberg, Wonderland with Val Kilmer and Lisa Kudrow, and Veronica Guerin, with Cate Blanchette. He is the founder and CEO of The Sager Group LLC, which publishes books, makes films and videos, and provides modest grants to creatives. For more information, please see www.mikesager.com. [Show Less]

You have subscribed to Smashwords Alerts new release notifications for Mike Sager.