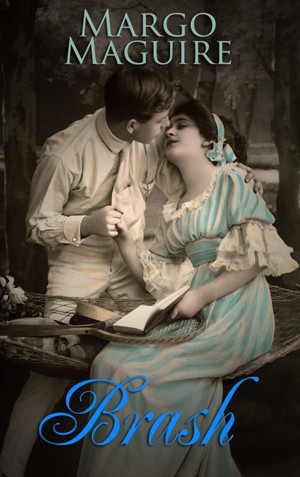 By Margo Maguire
Rated 4.00/5 based on 2 reviews
James Norris isn’t going to spend the rest of his life in the royal navy. He’s going to marry Virginia Barrington, and he rides to her family’s home to ask her to be his bride.

Stella Barrington, Virginia's sister, was a lame child, but now she barely limps. She’s been in love with James Norris for as long as she can remember, and if she wants to win him, she can be nothing but brash… More
When Lieutenant James Norris’s closest friend is killed in a horrible accident, he realizes life is far too short to spend it all in the post-Napoleonic navy. He decides it is time to marry, and he knows just the young woman he wants as his wife. Lady Virginia Barrington is charming and beautiful, and James travels to her family’s manor to ask her the most important question of his life.

Lady Stella Barrington was lame and sickly for much of her life. Now she walks with barely a limp, and she is ill no more than anyone else. She has been in love with James Norris for as long as her elder brother’s friend has been coming to visit at Barrington Manor. Stella cannot doubt that James has come to see her lovely but shallow sister. But Virginia is away, and if Stella wants to win the man she loves, she can be nothing but brash…

Margo Maguire has penned over twenty-five historical novels that have been translated by her publishers’ subsidiaries into nineteen languages. Her novels are full of adventure and romance, and span nearly a thousand year time span, from Medieval to Victorian times. Her March 2011 book, Seducing the Governess, has been nominated as a Reviewer's Choice Best Regency-era Romance for 2011 by Romantic Times Magazine. Her August 2012 book, The Warrior Laird, was also nominated for a Reviewer's Choice K.I.S.S. award, and was an RT Top Pick. Lately, Margo has ventured into the Regency era, with her Berkshire Bride series.
A former intensive care nurse, Margo also has a degree in history, which she has used extensively for researching her novels. She is the mother of three grown children, grandmother of two little boys, and she lives in the Midwest with her scientist husband and a variety of sassy pets.

Review
Laura VanGuilder reviewed on May 29, 2013

I liked that James came to see how lovely Lady Stella was. A very sweet story. I like the time period.

I really liked this sweet/sensual short story. It was well written and the character development was good. There was enough passion to keep the story moving along, interesting, and realistic; you understand they characters love and want each other. Will all of this romantic tension developing, the Author still does a wonderful job keeping it clean.

You have subscribed to alerts for Margo Maguire.

You have been added to Margo Maguire's favorite list.

You can also sign-up to receive email notifications whenever Margo Maguire releases a new book.