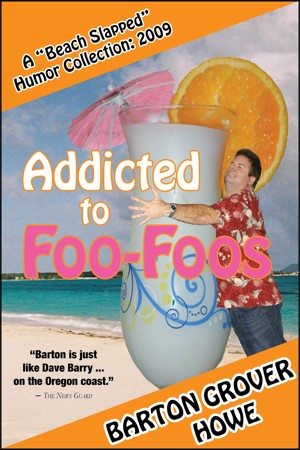 By Barton Grover Howe
Facing his addiction to umbrella drinks is just one thing Amazon.com best-selling author humor Barton Grover Howe takes on in his latest collection. Advice to Madison Avenue on men and Colt 40 Malt Liquor; why anyone makes women’s hygiene products non-disposable; and humanity’s attempts to investigate his bedroom: Yep, it’s time to get “Beach Slapped” again. More
Coming to grips with a life-long addiction to brightly colored drinks with umbrellas is just one of the things Amazon.com best-selling author Barton Grover Howe addresses in his latest compilation of newspaper humor columns. Among the highlights: advice to Madison Avenue on how to reach men (“Remember: we’re the kind of people that buy Colt 40 Malt Liquor because it’s huge and we can use the bottles in a water fight when we run out of balloons.”); pondering about how Madison Avenue chooses to reach women (“There are a LOT of women’s hygiene products, most of them being disposable. Which begs the question: Why not label all of them that way? I can’t imagine anyone buys these things as a souvenir.”); and observations on all of humanity’s attempts to figure out what’s going on in his bedroom. (“Trying to get pregnant seems to be EVERYBODY’s business, as if, somehow, the entire future of the human race is riding on my wife and I repopulating the species. It’s like I’m in a terrible Bruce Willis movie set in 2057. Or Brigham Young’s house in 1857.”)

Barton Grover Howe is a high school teacher and humor columnist who has spent most of the last 10 years teaching, being a mascot and generally not being near as funny as he thinks he is. A former newspaper reporter, hotel manager, aquarium diver, stand-up comedian, forcibly retired Disney On Ice performer and professional mascot, Barton Grover Howe has combined his experiences and skills from all of those environments to create writing with a voice like no other. Living proof that you don’t need hurricanes blowing the palm trees sideways to get beach slapped time and again.
He currently resides in the only small town on the Oregon coast that has seven miles of coastline and not one boat dock. He is married to the most patient woman on earth and is father to the cutest daughter in the universe, who got all of her looks from her mother.

You have subscribed to alerts for Barton Grover Howe.

You have been added to Barton Grover Howe's favorite list.

You can also sign-up to receive email notifications whenever Barton Grover Howe releases a new book.