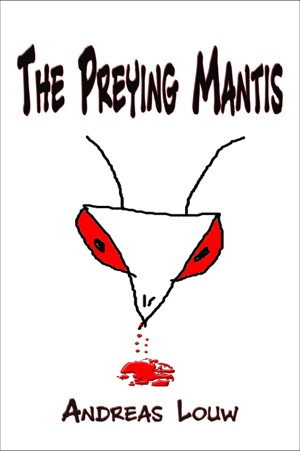 I grew up in Cape Town, but now live with my wife Janine in Montagu, which is about 200km from Cape Town.

Reviews of The Preying Mantis by Andreas Louw

I picked this up during the Smashwords Summer/Winter sale for two reasons. The plot sounded intriguing, and honestly the cover amused me. What I found inside was a plot that was mostly strong (although it fell apart at the end) that was unfortunately supported by some truly bad writing.

Let’s start with the good. The plot is genuinely creepy. Although the Preying Mantis (as he calls himself) is fairly typical for a serial killer thriller, he’s got enough unique qualities that the reader is left intrigued and guessing. The murder scenes are brutal and frightening. I was engaged enough that I kept reading in spite of the bad writing quality, purely because I wanted to know what happened at the end. Unfortunately, the plot at the end takes a bit of a nonsensical nose-dive, but, alas, that happens sometimes.

As for the writing itself, there are three separate issues at hand.

"Would you like to order out? I am quite hungry and can do with some sustenance." (location 1213)

"After about fifteen minutes he emerged form his office and said, 'Let us go.' " (location 2868)

"How come you being here all by yourself in the middle of nowhere, dear?" (location 3617)

The only way dialogue like this would work would be if, say, one character was OCD about never saying a contraction or had Asperger’s Syndrome or something. But none of the characters are like that and also they all speak exactly the same way. It’s a real problem for dialogue to sound so incredibly unrealistic. It drags the reader out of the story, plus it’s bad characterization. Each character should have an individual sound.

Finally, there are the general grammar/spelling issues. The most annoying being the author’s tendency to switch back and forth between present and past tense, frequently within the same sentence.

Overall, the book has a relatively unique plot that is overshadowed by a first draft quality level of writing. I encourage Louw to get either a co-author or an editor for future endeavors, as well as a wider variety of beta readers. Sound editing and checks by beta readers could have cleared up many of these issues.

Mmmmm I dont often read books but once i started reading I just had to finish. Brought me back to my youth when I could not put a book down. Bit odd name for a book but once you have read it it all comes together.

Action, love, suspense and new surprises makes the Preying Mantis a page turner! The humorous way the fresh and new ideas and angles are so beautifully written, makes this extra ordinary for a first time writer!

Congrats on a super book! Looking forward to the next ones!

You have subscribed to alerts for Andreas Louw.

You have been added to Andreas Louw's favorite list.

You can also sign-up to receive email notifications whenever Andreas Louw releases a new book.