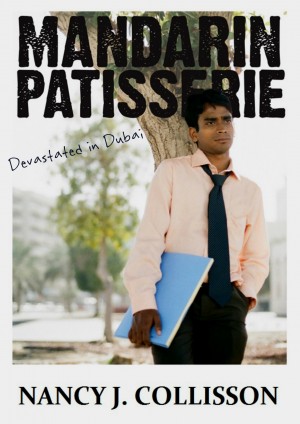 By Nancy J. Collisson
Based on devastating real-life experiences of author Nancy Collisson, the novel exposes the agony of being trapped in the ethereal vortex of Dubai when things that should go right, simply do not. Financial pressure, wicked scams, and a jail escape are part of the action that propel main character Vivek Alvares to a seeming safehouse, Mandarin Patisserie, a front operation where desert dreams die. More
Mandarin Patisserie reveals a tragic tale of a common man's pursuit of a wonderful life in the much ballyhooed emirate of Dubai, in this case, by twenty-five-year-old Goan, Vivek Alvares. Vivek’s mercilessly harsh experiences in the property, gold, jewelry and other popular business sectors of Dubai reveal a view of the emirate's dirty underbelly as only seen by those who hustle to make a buck on its streets. Vivek commences his journey as the quintessential good son, whose fine parents have provided him with comfort, good training, and a fine education in the UK and US. But, interacting with cold, transient strangers from all over the world while in a strange land, Vivek is too naive and trusting to notice red flags that forewarn a commonly experienced impending financial, emotional, and moral tailspin there. Too frequently in Dubai, young expats with the best of intentions find themselves in bizarre circumstances and difficulties, that frequently lead to collapse and their succumbing to Dubai’s detention and court system. Trapped within it, they discover that they’ve become commodities with an actual value on their heads – for Just as Dubai has made money selling sand, it makes money on just about everything else, including its prisoners who are rumored to be supported by big brother emirate, Abu Dhabi. The backdrop of what might otherwise be an ordinary journey fraught with expected challenges that one might expect to encounter when applying brains and ambition to achieve a modicum of success, is complicated in Vivek’s case by the fact that the emirate has not modernized in every sense that young ambitious people from throughout the world – and who have limited cultural knowledge or experience with the area – are willing to believe. Vivek's situation is unique in that he becomes forced to confront a warning that his mystical mother had given him prior to his departure. Before he left, she told him that he would find himself caught in an ethereal vortex from which many are unable to emerge unscathed – if at all.

Nancy Collisson was born in Milwaukee, Wisconsin, but has resided throughout the US and in Japan, Indonesia, and the United Arab Emirates. She earned a BA in English Literature at Marquette University and an MA in East Asian Languages & Cultures from the University of Kansas. Her thesis: 'An Examination of the Influence of Japanese Culture and the Failures of Economic Reforms Proposed by Supreme Command Allied Powers (SCAP) Economic Missions (1947 to 1949) on High Rates of Personal Savings in Japan,' is relevant to the Japanese post-war economic miracle.
Collisson has taught English and Japanese language at high schools throughout the United States, and at international schools in Indonesia, Japan, and at the American University in Dubai. She has also taught Japanese at William Jewell College and on live TV in Dallas, Texas. She also served as news editor of the Spooner Advocate based in northwestern Wisconsin. She is presently a professional writer and marketing and branding consultant where she resides in Dubai.
Along with 'Mandarin Patisserie,' she is the author of a collection of short fiction, 'Expiration Date & Other Stories,' which is also available at Smashwords.com.
Collisson is an expert at the mystical art of lexigramming - naturally seeing meaningful sentences in names and expressions - and this craft figures occasionally in aspects of her work.

You have subscribed to alerts for Nancy J. Collisson.

You have been added to Nancy J. Collisson's favorite list.

You can also sign-up to receive email notifications whenever Nancy J. Collisson releases a new book.