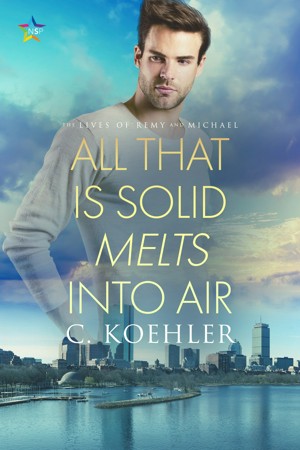 All That Is Solid Melts Into Air

Will he sacrifice his relationship or sacrifice his dreams? More
Remy thinks life after high school will be easier. He’ll go to California Pacific for a year while he gets a handle on his HIV, then after Michael graduates from high school, they’ll blast out of there for colleges—and life—on the East Coast. Then Remy visits Boston and everything changes. He realizes he likes CalPac. Turns out, Boston doesn’t have anything for him beyond one of the biggest regattas in North America.

Life grows more complicated when he gets home. He can’t find a way to tell Michael that he’s just blown their plan for their lives out of the water. Then Remy’s CalPac coaches drop a bomb on him. Those rowing officials who have been watching him? They are recruiters for the national team, and his coaches want him to try out. They’ll even let Lodestone coach him. Now he has to choose, school or crew, CalPac or Michael, and he still hasn’t told Michael he can’t transfer. Is there even a place for Michael in his life? Somehow they have to withstand training at the highest levels and having different goals. Will love hold them together…or tear them apart?
Available ebook formats: epub mobi pdf lrf pdb txt html
First 20% Sample: mobi (Kindle) lrf pdb Online Reader
Price: $6.99 USD
Buy Add to Library Give as a Gift
How gifting works
Create Widget
Tags: family drama gay lgbt contemporary college sports mm romance new adult rowing team
About C. Koehler

Reviews of All That Is Solid Melts Into Air by C. Koehler

You have subscribed to Smashwords Alerts new release notifications for C. Koehler.