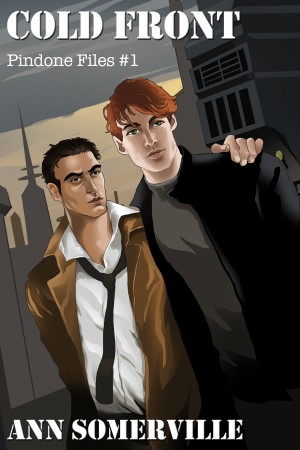 I read Ann Somerville's Darshian's Tales before I read Cold Front. I think it was a brilliant concept to write another series about the same planet and culture 3,000 years in the future.
It's a very different world now, a much nastier one as the planet has grown into the equivalent of our world, almost making it an Urban Fantasy but not quite because it's not set on Earth. I must admit I thought I'd downloaded a bad copy because the first 20 or so chapters are based on word building, repeating the start of the first chapter but taking the story in a different directions as it unfolds. I still gave this 5 stars but my only complaint was the 20-25 pages from chapter 1 were included in every chapter up until chapter 21. That's a lot of re-reading but I understand why she did this.

SO don't send a poor Smashwords staff member an e-mail saying you think you have a corrupted file. I have never encountered this to such a large extent before.

While the planet is no longer in the dark ages you discover that that time was actually their golden years, even though there was wars and civil unrest.

This was three stories in one that flowed together seamlessly, about two cops working together who slowly fall for one another. It is quite a brutal book too so if you're triggered by rape, hostage situations and murder then be forewarned as it's a graphic read but a damn fine one at that.

It was great to see that the very small handful of people on the planet still held their magical gifts. Although they're used in a very different was from how their ancestors used their's.

The writing is excellent as is the plot and sub plots, the main characters Dek and Ren are backed up by other solid major players in the book too that also has great minor sub plots that contribute to it all round experience which I found awesome.

You don't need to have read The 4 Epic novel's that make up The Darshian Tales but if you like the vibe of this world that Ann Somerville has created then definitely read them for a background on the planet, there is no storyline or information needed to read these first.

Excellent. What can i say that hasn't already been said. Read it. Well worth it. And a thank you to Whitecrow for the tip on "A Walk in Darkness". I'll be checking it out. I'm currently reading "Unsettled Conditions". Again, excellent, so far. Expect it will be the same throughout. Love Ann.

I enjoyed this. Ann is a good writer, so it is enjoyable to know the author cares enough to use good grammar and a spell-checker. Interesting characters, very well formed, and a good plot. I really liked the world they inhabit, Ann has done a good job of building a culture and a reason for that culture in her world. If you like this, look for her free "A Walk in Darkness", an alternate Dek and Ren story. Written a while after this, it shows more maturity in handling of the characters and their complexities. I'll be reading more of hers. If you like a well-crafterd, interesting story then this is it.

This is a good solid read for fans of mysteries. Somerville's novels are always well-written with fully developed characters that the reader can sympathize with. There's a good deal of gay sex, but it's part of a developing relationship that feels real. The mystery is a complex one, centering around a series of murders, and leads to an unexpected ending. It all takes place in an alternate universe where paranormal abilities are part of the culture, but the feeling is of a contemporary setting rather than someplace strange and exotic.

You have subscribed to Smashwords Alerts new release notifications for Ann Somerville.