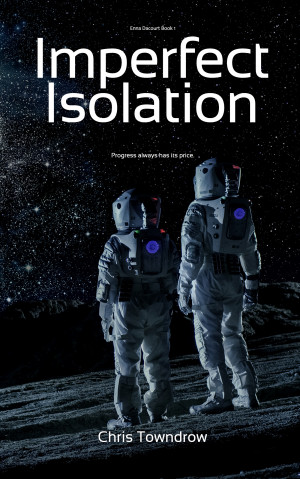 By Chris Towndrow
Lieutenant Enna Dacourt is stranded on a deserted asteroid with a brilliant roboticist. Killers on Earth hold knives to the throats of her family, unless she plays along with the subversive scheme of a global CEO. At stake are the future of humanoid robot development, and the destiny of the most successful company on Earth.
Getting off the asteroid alive is only the beginning of her adventure... More
In northern Sweden, the young son of local cop Kennet Carlsson discovers the body of Andreas Lindt, a crewman listed as being aboard the SpaceFleet science ship Belgrade, over 250 million miles away.

Escaping the apparently doomed ship, Lieutenant Enna Dacourt is forced to land a shuttle on an inconsequential asteroid. Her captor is Andreas Lindt.

In New York, a murderer is found dead. His accomplice takes flight towards the border, fearing that unseen powers are at work.
At a chateau in rural France, two men await a signal that will determine the fate of their unsuspecting hosts.

Soon, Enna discovers that her escape is neither luck, nor coincidence.
She is a pawn in a scheme that a powerful man cannot afford to lose.

At stake are the lives of her family, the future of humanoid robot development, and the destiny of the most successful company on Earth.

My most lauded work to date is 2019's “Tow Away Zone”, a quirky small-town black comedy, set in modern day Arizona. It has shades of the Coen Brothers’ film canon, and the black comedy Grosse Pointe Blank. It’s been well-received by readers, with 5* reviews on Amazon.

In 2020 I published the sequel – “Go Away Zone” - which take the characters into a romcom caper with more love and livelihoods at stake.
In 2021 I completed the trilogy with cozy mystery "Stow Away Zone".

My sci-fi journey started with space opera “Sacred Ground” being published on Kindle in 2012. It explores the deliberate, and accidental, casualties of a long interstellar war. It’s about uncertainty, faith, and the consequences of actions.

In 2018 I self-published my 2nd sci-fi novel – “Imperfect Isolation - which embraces robotics, asteroid mining and a snowy drive in an 80-year-old Porsche. It's a wild ride for my wisecracking heroine Enna.
The sequel, “Reprisals”, followed in 2019. In early 2021 I released the 3rd instalment, “Trip Hazard”, and in 2022 the 4th book in the series - "Freeze Effect".

Years ago I penned a collection of offbeat humorous stories and vignettes inspired by the style of early Woody Allen prose. “Igbad's Rollerblading Stunts and other stories” is basically a window into my nonsensical side.

My main project for 2022 is a dystopian drama which follows the tension of a family of four stuck for weeks in a nuclear shelter.

I'm also querying a historical romance Western, which was developed from an old screenplay script. It explores prejudice against the deaf community and the Native Americans, as a man struggles to reconnect with his lost son and come to terms with his own failings.

Imperfect Isolation - trailer
Kidnapped from an apparently doomed ship, wisecracking Lieutenant Enna Dacourt must find a way off a deserted asteroid, save her family, and foil the corporate espionage scheme in which she is an unwitting pawn.

About the Series: The Enna Dacourt books

It’s 2069. Mankind has settled on the Moon and Mars. SpaceFleet’s Lieutenant Enna Dacourt is thrust into a series of adventures, battling corporate greed, hired thugs and shadowy figures.
Armed with wisecracking wit, inner steel and the support of newly-found colleagues, Enna strives to outwit those who threaten her, her family, and her way of life.

You have subscribed to alerts for Chris Towndrow.

You have been added to Chris Towndrow's favorite list.

You can also sign-up to receive email notifications whenever Chris Towndrow releases a new book.