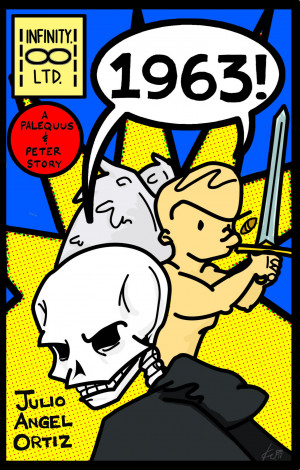 By Julio Angel Ortiz
Comic books. A shadowy benefactor. An artist's vision to save humanity that lies almost 50 years into the past. Two paratemporal agents- a retired Grim Reaper named Palequus and discharged cherub Peter- must stop the them from disrupting history, even as the true threat lies in the machinations of one of their greatest enemies… Supremo. More
Comic books. They are an old art form that transcends literary and social boundaries. A method of communication hinted at by the walls of cavemen and in cuneiform, the disparate remnants of these ancient arts have coalesced into a dynamic storytelling format today.

But what happens when one artist’s frustration transforms into a vision of “saving” humanity? Aided by a shadowy benefactor, as well as the rest of his newly-formed Youth and Beauty Brigade, Byron Foster, dubbing himself RetroLad, hatches a plan to save humanity and culture… and it lies almost 50 years into the past.

Julio Angel Ortiz is a writer in both print and electronic media. Julio has had an audio drama released for the original sci-fi series THE DOME and short stories published in collections by Obverse Books, as well as several eBooks available for Kindle, Nook, and other eReaders via his Vox Theory imprint. When not banging his head against his notebook in order to string words together, Julio works in Information Technology during the day and is also active blogging, posting on Twitter, and working at his photography.

You have subscribed to Smashwords Alerts new release notifications for Julio Angel Ortiz.

You have been added to Julio Angel Ortiz's favorite list.

You can also sign-up to receive email notifications whenever Julio Angel Ortiz releases a new book.