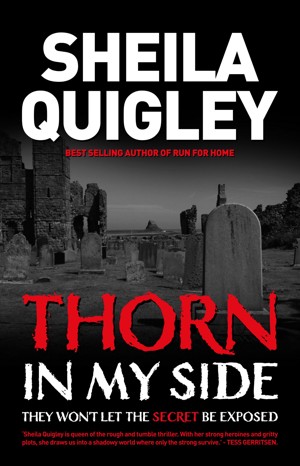 Thorn In My Side

By Sheila Quigley
First in the new series from Best Selling author Sheila Quigley, DI Mike Yorke takes you on a journey that will keep you gripped and turning every page. More
DI Mike Yorke is coming home. After three months in London, he’s looking forward to being back in the north east - but he’s barely off the train before he’s deep into the most bizarre case of his career.

A viciously flogged corpse. Children disappearing, the length of the A1. Horrific new street drugs. And buried somewhere is a deadly secret that will lead him down paths so dangerous, he will question the very fabric of society.

In the first in a stunning new series set on Holy Island, an explosive secret going back to the dawn of time is unearthed by a young woman who, fearing for her life, goes on the run in the wilds of Northumbria. The fate of the world is in the hands of DI Mike Yorke, and abused clairvoyant street kid called ‘Smiler’, and Mike’s elderly Aunt May. Everyone from the lowlifes of the London streets to the monks near Holy Island become involved in a race against time to save humanity.

From the celebrated author of the Seahills Estate novels comes a BRAND NEW Series that will have you sitting on the edge of your seat.

'Thorn in my Side is a fast and furious page turner, with one of the best characters in 'smiler', to grace fiction. The best book I read last year. (GRAHAM SMITH - crimesquad.com).

'A rattling good plot... it doesn't stop running until the final page by which time you will be breathless' (NEWCASTLE JOURNAL).

'The grande Dame of gritty northern crime offers a new series character, but with all her usual power and page turning style'. (CHRIS SIMMONS crimesquad.com).

Sheila Quigley's first dream was to climb mountains. Next she wanted to be an astronaut, this was down to her love of Science Fiction. Then she grew up, and her dream of one day becoming an author kept her going through a long list of jobs; machinist, presser, double glazing sales, market trader, and sometimes in the dead of winter she wondered what on earth she was doing plodding through heavy snow and ice knocking on strangers doors trying to sell them frozen food.
The hardest of these jobs though, was definitely picking potatoes on the local farm to keep the kids in shoe leather.

Sheila's first published novel, Run For Home was the subject of a fierce bidding war between eight of the UK's biggest publishers. The film maker Chris Terrril was commissioned by the BBC to make a fly on the wall documentary about the amazing story.

Sheila has four children( three daughters and one son) nine grandchildren- and three great grandchildren, though she still insists she's only 29.

You have subscribed to alerts for Sheila Quigley.

You have been added to Sheila Quigley's favorite list.

You can also sign-up to receive email notifications whenever Sheila Quigley releases a new book.