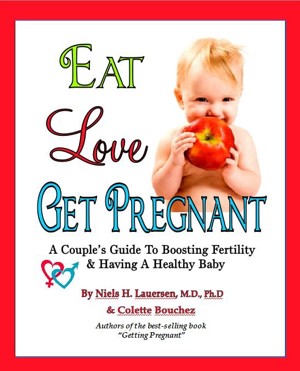 Eat. Love, Get Pregnant: A Couples Guide To Boosting Fertility & Having a Healthy Baby by Niels H. Lauersen, M.D. and Colette Bouchez

Renowned fertility expert Dr. Niels Lauersen & women’s wellness expert Colette Bouchez help you take charge of your fertility with a revolutionary self-help plan designed to help couples work together to achieve their parenting goals. More
Filled to the brim with new discoveries and exciting “A Ha !” moments from start to finish, Eat-Love-Get Pregnant will open your eyes to a whole new way of approaching pregnancy success – whether you are trying to get pregnant on your own, or already working with a fertility doctor.

Renowned fertility expert Dr. Niels Lauersen & women’s wellness expert Colette Bouchez help you take charge of your fertility with a revolutionary new self-help plan designed to show you and your partner how to work together to boost your conception odds, plan for a healthy pregnancy, & get pregnant faster – all without the use of expensive fertility treatments or medications.

Based on scientific research & tested on thousands of couples Eat-Love- Get Pregnant is a simple yet revolutionary plan that provides the quintessential “missing link ” absent from most other fertility programs – namely, the importance of not only boosting both male and female fertility simultaneously, but bold new evidence showing how, when couples work together in certain special and unique ways, they can create a unified “fertility power boost” strong enough to take them from infertile to fertile in as little as three months.

• For those thinking about getting pregnant it’s the planning tool that will help ensure not just pregnancy success but a healthy baby.

• For those already trying to conceive it’s a way to give their fertility a power boost and get pregnant faster.

• For those already working with a fertility doctor, the secrets in Eat- Love- GET PREGNANT will dramatically increase their chances for pregnancy success!

Just some of what you'll find in this heartwarming and fascinating new book:

* The Couples Approach To Boosting Fertility: What It Is & Why It Works
* How To Make Love To Get Pregnant - it’s not what you think!
* How To Find Your Most Fertile Time - brand new advice!
* How Pillow Talk Can Increase Fertility –and what to say to make it happen!
* How Your Relationship Affects Your Fertility – and how to make it work for you!
* The Secret Behind Orgasm & Getting Pregnant - WOW – wait till you read this!
* Secret Fertility Boosting Foods for Men & Women
* Vitamin Power Fertility Supplements - what science shows really works - what doesn't!
* Natural Herbs & Other Fertility Enhancers - some of these will really surprise you!
* How Stress Affects Fertility - & 6 Ways To Beat It To Get Pregnant Faster!
* How To Use A Power Nap, Meditation & Yoga to Have A Healthy Baby!
* Six Secret Natural Sperm Boosters Your Doctor Didn't Tell You!
* Easy, natural ways to reduce your risk of miscarriage
* How to ensure a healthy conception and a healthy baby

A true couples guide, "Eat, Love, Get Pregnant" provides the tools that will empower you and your partner to not only boost your fertility, but get pregnant faster, avoid miscarriage and give birth to a stronger, healthier baby.

By the authors of Getting Pregnant - the world's best selling fertility book for over 20 years - and co-directors of GettingPregnantNow.org - one of the top fertility websites worldwide - you'll soon discover why those who have tried this program call Eat – Love –Get Pregnant their new “Fertility Bible” - and a "must read" for any couple who wants to get pregnant!
Available ebook formats: epub pdf rtf lrf pdb html
First 20% Sample: epub lrf pdb Online Reader
Price: $7.99 USD
Buy Add to Library Give as a Gift
How gifting works
Create Widget
Tags: pregnancy infertility conception fertility fertility diet get pregnant have a baby how to get pregnant natural conception male fertility ovulation prediction boost fertility natural pregnancy
About Niels Lauersen, MD & Colette Bouchez

In private practice for more than 30 years, Dr. Niels Lauersen founded the New York Medical Center for Reproductive Technology in 1984 to meet the growing needs of the thousands of patients from the United States and abroad who sought his expertise every year.

As a board certified obstetrician/gynecologist, as well as a surgeon, Dr. Lauersen became world-renowned for his expertise in the management of high risk pregnancy, the treatment of endometriosis, PMS, & hormone imbalances as well as the development of fertility - sparing surgeries to avoid hysterectomy.

As a fertility expert, he was a founding member of the New York Society for Reproductive Medicine and among the first private physicians in the New York area to offer a full range of infertility treatments, including IVF, GIFT, and the newest ICSI , at his prestigious Park Avenue fertility center.

Educated in his native Denmark , Dr. Lauersen received his American medical training at New York Hospital-Cornell Medical Center, where he continued to do research and clinical patient management and held a professorship in Obstetrics and Gynecology. His academic career expanded, to include professorships at both the Mt. Sinai School of Medicine and New York Medical College.

In addition to his private practice, he was also on the clinical staff of Mt Sinai Hospital, Lenox Hill Hospital, and St. Vincent’s Medical Center, all in New York City.
D
uring his active practice career, Dr. Lauersen was a Fellow of the American College of Obstetricians and Gynecologists, and a member of the American Medical Association, the Society For Gynecological Investigation, The American Fertility Society, and the NY Obstetrical & Gynecological Society.

As the author of 14 books on women’s health care, including the international best selling fertility book Getting Pregnant, Dr. Lauersen has published more than 100 hundred scientific medical papers, and wrote and edited several medical textbooks. He has lectured extensively throughout the world and appeared on numerous national television and radio shows including those hosted by Oprah Winfrey, Joan Hamburg, Regis Philbin, Phil Donahue, Sally Jessy Raphael, Maury Povitch and Geraldo Rivera. He has been featured in articles in newspapers and magazines worldwide including Time Magazine, The New York Times, New York Magazine, The NY Daily News, People Magazine, The Los Angeles Times and others.

Currently, he is the medical director of GettingPregnantNow.org, one of the leading fertility and pregnancy web sites as well as a principal in a medical publishing firm. He also a consultant on the use of natural treatments in both men and women's health.

Dr. Lauersen also holds a European medical license for practice throughout the European Union. He lives in New York City.

Colette Bouchez - Co Author
As the author of 10 books on women's health and beauty , including an international best seller, and as founding editorial editor of Elle Media Network, she is responsible for the content of over 20 websites for women. Her online column - RedDressDiary.com – is regularly read by millions of women each week.

Indeed, with over 100,000 pages of references to her work in major search engines, resulting in more than 1 million individual articles and book excerpts, Ms. Bouchez is one of the most widely read health and beauty experts on the Internet.

As the former content producer for WebMD’s women's health, Ms. Bouchez was responsible for conceptualizing and creating content for some 35 million new and unique website readers every month.

Currently Ms. Bouchez is a health and beauty columnist for Examiner.com - National Edition where her weekly reports are seen by 22 million readers nationwide.

As a journalist Ms. Bouchez's work has been honored by many major medical organizations including: The American Cancer Society, •The American Academy of Dermatology, The American College of Colon Surgeons, The Coalition of Breast Cancer Organizations, The Multiple Sclerosis Society, and Columbia School of Journalism for her health coverage following the aftermath of 9-11.

In 1996 she was the writer on the award winning WNBC TV team that produced a seven day report on breast cancer, taking the Emmy for best news documentary. In 1997 she was one of only a small number of journalists ever to be offered a fellowship at the University of Virginia College of Medicine.

In addition to her professional journalism memberships, in 2001 Ms. Bouchez became one of only a select few journalists to be admitted to the prestigious AMWA -American Medical Women's Association -the division of the AMA (American Medical Association) that honors female physicians and researchers.

Her reporting experience spans more than two decades and includes 14 years as senior medical reporter for the NY Daily News , founding member of the Health Day News Service and content producer for WebMD. She continues to be a contributing editor to major media including magazines published by the American College of Obstetricians & Gynecologists.

Ms. Bouchez is also a medical/legal consultant for the prestigious law firm of Gerald Shargel and Associates where her medical reports are frequently used as part of the defense in high profile murder cases. She lives in New York City.

Other Books By These Authors

Books By Dr. Niels Lauersen:
It’s Your Body
Listen To Your Body
PMS & You
Childbirth With Love
The Endometriosis Answer Book
It’s Your Pregnancy
Getting Pregnant
You’re in Charge
The Breast Book
The New Fertility Diet Guide
Green Fertility
Eat, Love, Get Pregnant

You have subscribed to alerts for Niels Lauersen, MD &amp; Colette Bouchez.

Would you like to favorite Niels Lauersen, MD &amp; Colette Bouchez?

You have been added to Niels Lauersen, MD &amp; Colette Bouchez's favorite list.