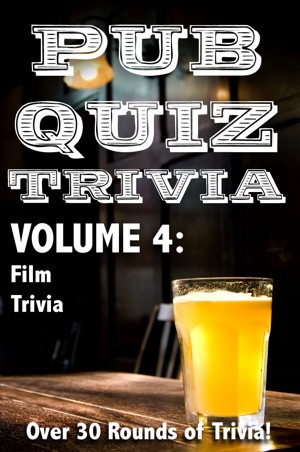 By Bryan Young
In addition to his writing, author Bryan Young is an accomplished Pub Quizmaster and has assembled a collection of his best trivia questions to stump the minds of trivia buffs everywhere.

With more than 30 rounds of trivia, Volume 4 covers the films you know and love, actors, directors, and the movie business.

This is a must have for any trivia buff or Pub Quizmaster.

Bryan Young works across many different mediums. As a film producer, his last two films (“This Divided State” and “Killer at Large”) were released by The Disinformation Company and were called “filmmaking gold” by The New York Times. He’s also published comic books with Slave Labor Graphics and Image Comics. He’s a contributor for the Huffington Post and the founder and editor in chief of the geek news and review site Big Shiny Robot!

You have subscribed to alerts for Bryan Young.

You have been added to Bryan Young's favorite list.

You can also sign-up to receive email notifications whenever Bryan Young releases a new book.