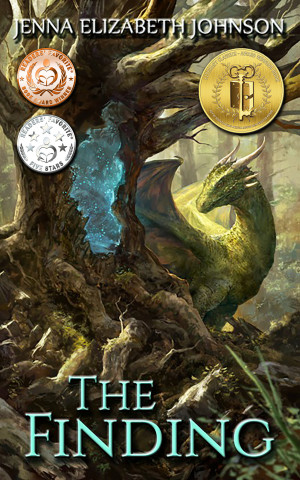 The Legend of Oescienne - The Finding (Book One)

By Jenna Elizabeth Johnson
Rated 4.50/5 based on 4 reviews
When the dragon Jaax receives word that a human infant has been found in the province of Oescienne, he doesn't believe it. Humans have been extinct for centuries, trapped by a terrible curse and left to live out their existence in the form of dragons. Jaax assumes responsibility for the baby girl only to discover that what he has been seeking for so many years has finally been found . . . More
Dragon mentors, magical creatures, and a young girl looking for adventure: Harry Potter meets Eragon.

"A remarkable dragon story for YA and teens. If you enjoy the Eragon book series by Christopher Paolini, you love this series!!" ★★★★★

When the dragon Jaax receives word that a human infant has been found in the province of Oescienne, he doesn't dare believe it. Humans have been extinct for centuries, trapped by a terrible curse and left to live out their existence in the form of dragons. Despite his doubts, however, Jaax assumes responsibility for the baby girl only to discover that what he has been seeking for so many years has finally been found.

Jahrra knows all about the legends and sagas of Oescienne, but never in her wildest dreams would she believe that she played a part in one of them. She is far too busy dodging the bullies at school and seeking out new adventures with her friends to worry about what secrets her dragon mentor might be keeping from her, or that her every move is being watched by something living in the forest surrounding her home.

But the secrets run deep, and as Jahrra fights to earn her place in this extraordinary world, she will begin to unravel the truth of it all: that she isn't as safe as she thought she was, that danger lurks around every corner, and that her role in this unfurling tale is far more significant than she could possibly imagine.
Download: epub mobi (Kindle) pdf more Online Reader
lrf pdb txt
Price: Free! USD
Add to Library
Create Widget
Tags: adventure young adult dragons epic fantasy fantasy series elves juvenile fiction eragon pottermore girl hero
About Jenna Elizabeth Johnson

An epic fantasy adventure tale. A land where once humans; elves; dragons; unicorns; faun etc. lived in harmony is now under an evil king’s rule. Centuries ago, the king destroyed all humans and transformed the last humans of the city of Tanaan into dragons. Then a prophecy foretold that pure blood human girl would be born and would vanquish the king.

Jahrra is that child, placed by dragons in the care of a poor but caring couple. She is raised to believe that she is Nesnan (mix of humn/elvish/dwarven blood). She attends school and makes two friends but is tormented endlessly by a pair of wealthy cruel twins. She becomes the ward of kindly dragon Hroombra who is so old he can no longer fly, but she hates the younger dragon Jaax who is cold towards her.

Delightful story - after finishing this book, I bought the next 4 books in the series.
I deducted 1 star due to the grammar errors that could be corrected with proofreading.

i thourly enjoyed this book.and want to read the second book very much so.i wish it was free as this one is.

I highly recommend this author and this book to anyone wanting to read something a little different. This book was like a breath of fresh air. I thoroughly enjoyed reading the first in this series and couldn't wait 'til I could get the second, which I am currently reading. (I am thoroughly enjoying the second one, too.)BUY THIS BOOK PEOPLE!!!!!!!
I,too, noticed the typos in the book. That happens to be a pet peeve of mine, but I honestly barely noticed. That is unheard of from me.
Love what I've read so far. Keep up the good work. I will be buying the rest of your books soon.
Thank you.

A basically well-written story that with intriguing characters. It would be a 5-star book except for some glaring misuse of language. For example. Jahrra is expecting Raax to bring the "anecdote" (read: "antidote") to a plague that has infected her foster father. There were a couple of gaffes like this. The problem with this type of gaffe is that it is not easy to quickly know what is meant, as is the case with gaffes like "you're" instead of "your".

I give the book 4.5 stars and have purchased the second volume.

You have subscribed to alerts for Jenna Elizabeth Johnson.