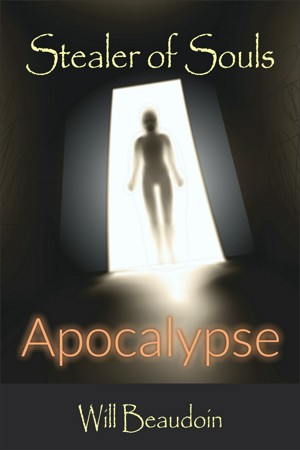 “There are probably lots of things about this place we don't understand,” said Al. “Let's just concentrate on getting out. And as far as Peterson is concerned, everything he told you was most likely a lie. It seems to me the only thing that limits you is your knowledge."

Peterson's anger flared and he made a grab for Mark, who jumped back at the last second. "You think you're going to get out of this alive?
Available ebook formats: epub mobi html
First 10% Sample: epub mobi (Kindle) Online Reader
Price: $3.99 USD
Buy Add to Library Give as a Gift
How gifting works
Create Widget
Tags: crime third eye astral travel battle evil astral realms interdimensional gate
About Will Beaudoin

His Father was born in Quyon, Quebec which still has the last remaining ferry across the Ottawa River. His Mother’s maiden name was Buck and she was born and raised in Bath, Ontario, Canada, about 35 kilometers west of Kingston on the north shore of Lake Ontario. Her ancestors came from the United Empire-Loyalist who fled the United States after the revolution and others from the bayous of Louisiana. His Mother would tell him tales about her ancestors, who, while fleeing from both the Americans and the Indigenous Peoples across Lake Ontario in the winter, made it by the skin of their teeth, with the ice breaking up behind them! Quite a mix!
This gives Will a unique outlook on the Canadian story. Having both British and French backgrounds along with the Algonquin connection, make him an unbiased source when writing. He is strongly connected to all his ancestral cultures.

Brought up in the tumultuous time of the sixties and seventies, his skeptical and adventurous nature, took him on many daring journeys. He was in the Canadian Military in the early seventies. When he was discharged he worked the nickel mines in Thompson, Manitoba. He married a California beauty queen at twenty-two and lived in the Los Angeles basin for three years developing an understanding of Americans and how they think and work.
It was at this time in California that Will went through a life changing event. He was hit by a truck which created a lot of trauma in his physical body. Not being able to pursue his martial arts and physical activities anymore he was drawn to writing.

Will had always written poetry and lyrics but never a novel. It took years of starts and stops to finally come to a time in 1990, after the untimely death of his first wife, that he started Stealer of Souls. He finished it in 1993. It was also at this time that his interest in Spirituality was increased. He learned to meditate more effectively and was soon doing readings and teaching Meditation and Spirituality.

Will ran his own business in the Holistic Health Field for twenty-four years before retiring. He is now a full time Author and Mystic. His intent is to write exciting fiction novels based on a bit of truth that will not only entertain his readers, but also, hopefully, help them to become a better person.
Peace and joy to all!

Learn more about Will Beaudoin

Reviews of Stealer of Souls: Apocalypse by Will Beaudoin

The story continues from Stealer of Soul taking the reader on a rollar coaster ride of exciting action and adventure. In the Rusegate if you can think it you can manifest it, and the children trapped there put it to the test as they battle to escape with the help of our hero and his eclectic group of friends. The story will keep you interested til the end.

You have subscribed to Smashwords Alerts new release notifications for Will Beaudoin.

You have been added to Will Beaudoin's favorite list.

You can also sign-up to receive email notifications whenever Will Beaudoin releases a new book.