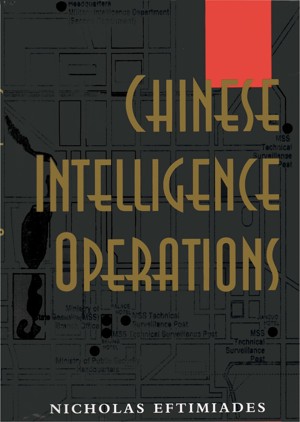 By Nicholas Eftimiades
This book is by far the best ever published on the subject. The author makes extensive use of primary and secondary sources including active Chinese Intelligence officers, internal Chinese documents, and publications. His approach is clearly analytical with no unsupported opinions. This work is the only one of its kind. It remains a "bible" in the Intelligence Community. More
From Publishers Weekly: Written by a Defense Intelligence Agency analyst, this is a straightforward examination of the structure, operations and methodology of the intelligence services of the People's Republic of China. Eftimiades describes how the Ministry of State Security--China's preeminent civilian intelligence-gathering entity--draws on the services of diplomats, commercial representatives, Chinese communities in overseas cities and students. (The People's Republic sends approximately 40,000 students abroad annually.) His analysis of the case of Larry Wu-Tai Chin, a longtime CIA employee who was convicted of espionage in 1986, reveals much about Chinese operations in the United States. Although Eftimiades cautions that the Ministry of State Security will continue to penetrate and exploit the political, academic, industrial and technological institutions of Western nations, he adds reassuringly that China's intelligence apparatus is hobbled by its own red tape and hindered by the stultifying bureaucracy of the Chinese Communist Party. Of interest mainly to specialists.

Nicholas Eftimiades in an author and lecturer and lives in London, England. His career spans several US government agencies and hundreds of thousands of miles in Africa, Latin America, Europe, Asia, and the Middle East.

Mr. Eftimiades authored a book and number of scholarly articles on national security, technology, and outer space issues. His book "Chinese Intelligence Operations", is an examination of the structure, operations, and methodology of the intelligence services of the People's Republic of China. To date, it remains the only scholarly analysis of China’s intelligence services.

Nick's latest work is a political and philosophical satire entitled "Edward of Planet Earth". It is a madcap adventure that spoofs modern life, from organized religion to the traffic control system. The story takes place 200 years in the future where Edward Temple, an ordinary person, is caught up in an zany world where self-aware super-computers are as argumentative, egotistical, demanding, and emotionally needy as the humans they serve. Everything is fair game as Edward navigates befuddled governments, psychotic software, greedy corporations, overly attentive robots, and women. And of course jelly donuts find their way into the story.

Nick is a frequent lecturer and public speaker on future technology and societal changes, and national security issues. He has appeared on CBS Evening News with Connie Chung, Dateline NBC, ABC's Day One, BBC America, National Public Radio, and dozens of other television and radio broadcasts. Eftimiades testified before several US Congressional and Presidential Commissions concerning National Security issues, future technology development, and the future of the US space program. He has been a consultant for several Hollywood movies.

In his off time Mr. Eftimiades formed and manages the Federation of Galaxy Explorers, a non-profit organization to educate and inspire children in space science and engineering. To date, Galaxy Explorers has educated and inspired over 35,000 children. He is also a Visiting Fellow and Adjunct Professor at Kings College, War Studies Department, London. Nick is a passionate amateur astronomer. 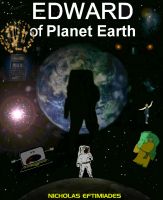 You have subscribed to alerts for Nicholas Eftimiades.

You have been added to Nicholas Eftimiades's favorite list.

You can also sign-up to receive email notifications whenever Nicholas Eftimiades releases a new book.