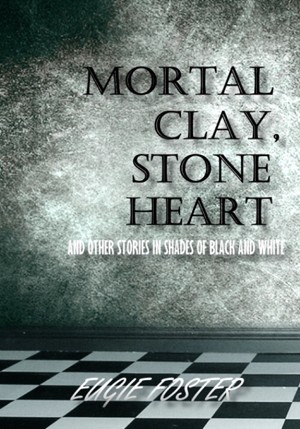 Mortal Clay, Stone Heart and Other Stories in Shades of Black and White

Contents:
* The Life and Times of Penguin
* Running on Two Legs
* Black Swan, White Swan
* The Bunny of Vengeance and the Bear of Death
* A Nose for Magic
* The Center of the Universe
* The Wizard of Eternal Watch
* Mortal Clay, Stone Heart

THE LIFE AND TIMES OF PENGUIN:

“Eugie Foster’s ‘The Life and Times of Penguin’ succeeds in being, by turns, funny, thought-provoking, and poignant”
—Douglas Hoffman, Tangent

“Told from the point of view of a balloon animal penguin, the toy’s brief but eventful life manages to jam in enough existential angst to give Kierkegaard indigestion, an astonishing emotional depth, and yet fully embrace the essentially absurd nature of [Eugie Foster's] story.”
—Martin McGrath, The Fix

“a beautiful fantasy, which employs the trappings of children’s fiction, with adult emotional themes of risk and mortality.”
—Talie Helene, ASif

“A wonderful story, one that I enjoyed reading tremendously. It’s one of the best stories I’ve ever critiqued in my years of teaching writing workshops.”
—A.C. Crispin

“a beautiful story—touching without being sentimental, with characters that come believably to life.”
—Victoria Strauss

“the beauty of the language carries one along...It is difficult to write a thoughtful story that features a terminal disease without melodrama, and Eugie Foster achieves it with style.”
—E. Sedia, Tangent

THE BUNNY OF VENGEANCE AND THE BEAR OF DEATH:

“a profoundly strange supernatural look at the morality of revenge.”
—Nick Gevers, Locus

Eugie Foster calls home a mildly haunted, fey-infested house in metro Atlanta that she shares with her husband, Matthew. After receiving her master's degree in psychology, she retired from academia to pen flights of fancy. She also edits legislation for the Georgia General Assembly, which from time to time she suspects is another venture into flights of fancy.

Eugie received the 2009 Nebula Award for Best Novelette and was named the Author of the Year by Bards and Sages. THE DRAGON AND THE STARS anthology, edited by Derwin Mak and Eric Choi, with her story, "Mortal Clay, Stone Heart," won the 2011 Prix Aurora Award for Best English Related Work. Her fiction has also received the 2002 Phobos Award; been a finalist for the Hugo and British Science Fiction Association awards; and been translated into eight languages. Her publication credits number over 100 and include stories in REALMS OF FANTASY, INTERZONE, CRICKET, CICADA, FANTASY MAGAZINE, and anthologies NEBULA SHOWCASE 2011, BEST NEW FANTASY, and BEST NEW ROMANTIC FANTASY 2. Her short story collection, RETURNING MY SISTER'S FACE AND OTHER FAR EASTERN TALES OF WHIMSY AND MALICE, was published in 2009 and has been used as a textbook at the University of Wisconsin-Milwaukee and the University of California-Davis.

Reviews of Mortal Clay, Stone Heart and Other Stories in Shades of Black and White by Eugie Foster

This is an amazing collection of short stories. They are touching, funny, moving and generally awesome (and skunks. Lots of skunks, and now I want one for a pet). Most are best described as modern, or alternate view, fairy tales. It also has a decided oriental feel to it, which is great considering how much of fiction is euro-centric. Highly recommended to anyone who has an active imagination.

You have subscribed to alerts for Eugie Foster.

You have been added to Eugie Foster's favorite list.

You can also sign-up to receive email notifications whenever Eugie Foster releases a new book.