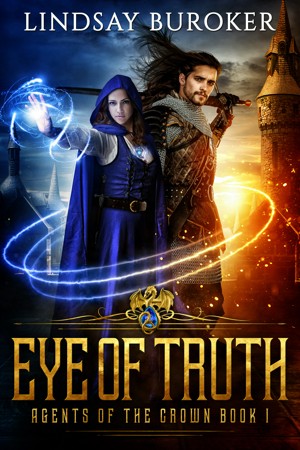 He’s accused of stealing an ancient artifact with the power to start another war. Jev would gladly hand over the artifact to stop more suffering, but he has no idea where it is or even what it looks like. The inquisitor woman definitely has the wrong person.

Inquisitor Zenia Cham grew up with nothing, but she has distinguished herself as one of the most capable law enforcers in the city, and she’s next in line to become archmage of the temple. All she has to do is find the Eye of Truth, and her superiors are certain that Jev has it.

He tries to charm her with his twinkling eyes and easy smile, but she’s not letting any man get between her and her dreams. Especially not a thief.

About the Series: Agents of the Crown

Orphaned at a young age, Zenia Cham has fought and scraped her way into a position of honor as an inquisitor for one of the city's temples. But an even greater destiny awaits. Impressed by her deeds, the king offers her a prestigious position as one of his elite Agents of the Crown.

The missions will be dangerous, and she’s not sure she wants the partner she’s being assigned—a cocky noble lord from a wealthy estate—but she has the opportunity to distinguish herself as she serves not only the city but the entire Kingdom.

How could she say no?

There’s just one problem. The king gives her a mysterious dragon tear that’s nothing like the other magical gems she’s seen. She may need its power to stay alive in this perilous new job, but dare she rely upon it?

Also in Series: Agents of the Crown

Reviews of Eye of Truth by Lindsay Buroker

Review
erwin game reviewed on March 5, 2022
(no rating)
I like the fantasy stories offered.

A war with the Elves has just ended and the main character has come home to face arrest after being accused of stealing a valuable magical artifact. The story is a fantasy, no hint of science anywhere, and mainly a mystery but with a few violent episodes. There are plenty of twists but when the villain is identified, it's not totally unexpected. The only small imperfection, some of the characters sometimes seem deliberately obtuse when that will lead to a more exciting event later on.

This seems to be on the same planet as her other stories that I've read so far, but in a different region with a slightly different culture, feudal but with steam age technology. If so, I think that's a good thing, too many authors have planets that are about as big as a small town in the midwest. The Elves in this have much in common with those of most authors, more warlike than my own in modern times, but with much in common. There is attraction in the story, but no actual sex. All in all, another as good as all the others of hers that I've read, one of the best pros in this space.

This is a thoroughly enjoyable book in true Lindsay Buroker style . It is an interesting fantasy story with a fiesty heroine , witty repartee and seasoned with love

You have subscribed to Smashwords Alerts new release notifications for Lindsay Buroker.