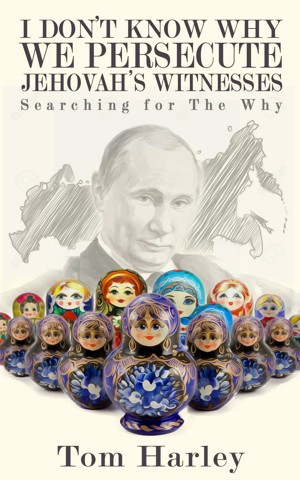 I Don't Know Why We Persecute Jehovah's Witnesses: Searching for the Why

By Tom Harley
Rated 4.50/5 based on 2 reviews
Searching for the why—at first glance, what could be easier? Just read the charges. But when Putin says, “Jehovah’s Witnesses are Christians, too. I really don’t understand why they are persecuted”—there appears more to it than meets the eye. When Human Rights Watch says, “Russia’s religious persecution focuses almost exclusively on Jehovah’s Witnesses,” the plot thickens. More
Long: Like Luke to Theophilus, here is a book that “traces everything from the start with accuracy.” Like Luke to Theophilus, here is a book that tells it from the believer’s point of view. Stripped of the red herrings that plagued Dear Mr. Putin—Jehovah’s Witnesses Write Russia, updated to the February 2021 present, and ever respectful towards the land of the bear, in most ebook forms it continues to be free, a labor of love.

Here are presented the modern-day Acts of Russia with regard to worship, the acts of believers and of those who oppose them. The acts of Russia have taken a dark and perplexing turn, puzzling even Putin. Can it be? The wizard who runs Oz doesn’t know how his contraption works? Here is a book that picks up where Baran’s Dissent on the Margins (2014) leaves off. The tale has not yet ended. But then, neither had the tale ended when Luke completed the first century Book of Acts.

Tom Harley lives with his wife and dog in New York State. He plays bi-weekly games of Scrabble with his brother, who cheats. Lately he has taken up playing Splendor with his wife. She lost badly at first and was getting discouraged, so he gave her some pointers. Now he can’t beat her. Why did he do that?

Tom is also a practicing Jehovah’s Witness for many years. He has many an anecdote to share with regard to spiritual life and is author of two special-focus books—one a defense the faith in Russia, and one a defense of it in Western lands.

In his lighter moments—and he tries to stay light throughout, even on serious topics—he loves self-deprecating humor. He also likes the kind of humor where you make fun of yourself. He loves hyperbole. He also likes wild exaggeration to make a point.

Reviews of I Don't Know Why We Persecute Jehovah's Witnesses: Searching for the Why by Tom Harley

I appreciated reading this book so much. Why are Jehovah’s Witnesses maligned and persecute when they are only doing what Jesus commanded. That is to go and tell others about God’s Kingdom and to make disciples. This writing is very clear why these things take place and why these very nonviolent people are deemed dangerous. A good read that I encourage others to download.

I read the e-book over two days. It's a review of recent historical events as well as an on-going story that melds religion/politics/human relations/ and institutional corruption.

Do Jehovah's Witnesses meet the current definition of a cult? Are they 'dangerous' to Russian society? To law enforcement agencies? To families? To individuals? Read actual arguments - from both sides. Violent ISIS members and JW's are nowhere near each other on any plane or spectrum. Yet Russian authorities have been manipulated to believe they are akin to one another.

Tom is a good story teller. He writes in the voice of an older generation. His vocabulary is diverse and sometimes folksy. The book would benefit from shorter, more concise sentences but then you'd lose the folksy voice. Maybe it would benefit from becoming an audio book.

The trouble comes with the translation of the Russian parties quoted and the clumsy Google Translation to English. Harley couldn't edit the AI translation because changing their words even to make them easier to comprehend in English would've altered the original intent and meaning. The translation is clunky and stifles the flow of the story - but the story is intriguing so I encourage you to take the time and power through those portions.

Russian culture likes paranoid conspiracies and urban legends. From before Soviet times this has been true. When someone draws a conclusion first and then must manufacture evidence to match it, Russians with historical memory don't lift an eyebrow. Western readers will be frustrated by the Russian Federation's version of a 'justice' system.

You have subscribed to alerts for Tom Harley.

You have been added to Tom Harley's favorite list.

You can also sign-up to receive email notifications whenever Tom Harley releases a new book.