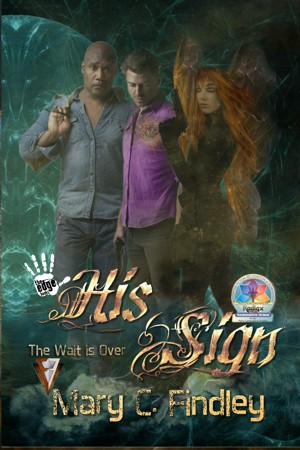 His Sign: The Wait Is Over: A Serial Paranormal Urban Fantasy

A discouraged minister, a handful of manna, and a trip to Abraham's Bosom convince him that Christians waiting for a sign need to wake up and acknowledge God's working in the life they live every moment. Drew's world fills with powerful enemies and unlikely allies.

Who or what are the Sethites and why (and from what) do they protect him? Why is a farm producing a miraculous bumper crop for the first time in years? Can he trust the person he suspects most of wanting him dead, and solve a puzzle that may save people marked for genocide from physical and spiritual foes?
Available ebook formats: epub
Price: $0.99 USD
Buy Add to Library Give as a Gift
How gifting works
Create Widget
Tags: paranormal genocide demon possession allegorical fantasy ancient protectors 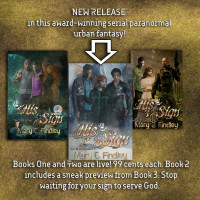 Drew Goddard doesn't realize God doesn't have to give us a sign to start serving Him. But he gets one anyway when someone shoots him in the heart. Instead of dying, he finds a glowing symbol in his chest that forces him to change everything. Interdimensional beings suddenly become his new reality and he joins forces with an ancient order sworn to protect mankind but fallen far and few in numbers. As evil grows and unexpected alliances form, Drew is pulled into a conflict he never imagined and sees God give gifts to men they barely understand how to use. Trust and fear wrestle for control as dividing and uniting forces from the past and present seek to win the battle for men and their souls.

Reviews of His Sign: The Wait Is Over: A Serial Paranormal Urban Fantasy by Mary C. Findley

You have subscribed to alerts for Mary C. Findley.

You have been added to Mary C. Findley's favorite list.

You can also sign-up to receive email notifications whenever Mary C. Findley releases a new book.