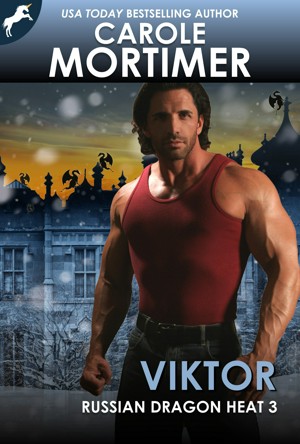 By Carole Mortimer
As a 600 year old dragon shifter Viktor has accepted the idea he will never find his fated mate. Until two of his brothers find their human mates. Still, Viktor hadn't expected, as he was flying over an island on his way to somewhere else, that he would sense his fated mate lived there. He only hoped she was single and willing to believe in dragon shifters! More
VIKTOR (Russian Dragon Heat 3) is the third book in the Amazon #1 Russian Dragon Heat paranormal series. These stories have passion and danger, with the occasional visit from characters in my previous dragon shifter series, Dragon Hearts.

As a 600-year-old Russian dragon shifter, Viktor has accepted his fate is to be alone until he reaches the end of his very long life.

At least he had, until two of his brothers recently found their fated mates.

Still, he was only flying over the island that day on his way to somewhere else, before he sensed her.

His fated mate, the one woman meant for him.

She was down there, on an island he discovered was full of myth and legend, with a history of wrecked Viking ships, and a bridge where the locals waved to the fairies ‘for luck’ as they passed over it and visitors made wishes. A land from which, when Viktor landed as dragon on the top of the island’s only mountain, he was able to see the Seven Kingdom of this Isle of Man. The island itself. Scotland. Ireland. England. Wales. The sky. And lastly the Irish sea, ruled over by the mythical Celtic god, Manannan.

Surely if any woman could accept the existence of dragon shifters, could accept him as her mate, it would be one from this unique and magical island?

About the Series: Russian Dragon Heat