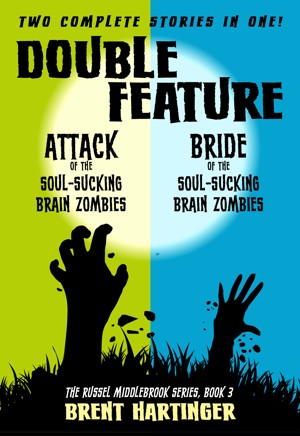 By Brent Hartinger
It’s a horror movie extravaganza in the third book in Brent Hartinger’s Russel Middlebrook Series. Two complete books in one recount the simultaneous stories of best friends Min and Russel who sign up to be extras on the set of a zombie film–-and learn that there’s nothing scarier than high school romance!

Winner of the Lambda Book Award.

(Previously published under the title Split Screen) More
Book 3 in the Russel Middlebrook Series, Winner of the Lambda Book Award

It’s a horror movie extravaganza in the second sequel to Brent Hartinger’s Geography Club. Two complete books in one recount the stories of best friends Min and Russel who sign up to be extras on the set of a zombie film — and learn that there’s nothing scarier than high school romance!

But beware! Russel and Min’s separate stories affect each other in surprising ways — and you’ll have to read both books together to find out the whole story.

“I really think this guy could be the next Judy Blume.”
– Pop Candy

“Hartinger has a knack for teen dialogue, and his characters spring to life — even in costume as the undead. At the heart of Zombies is the teen friends’ respect and caring for each other, which, these days, is downright refreshing.”
– USA Today

“Both stories stand alone, yet each compliments the other. To be expected, the action is fast and funny … [Hartinger] puts his best humor skills to use, and no doubt the same teen fans who formed their own geography clubs will be dubbing their dissenters soul-sucking zombies.”
– Kirkus Reviews

“Imaginatively delightful … Hartinger makes clever use of the fact that no two people live through — or recall — shared events the same way.”
– Richard Labonte’s Book Marks

“The best writing of the season … a great read for any dreary afternoon.”
– OutSmart Magazine

“Hartinger uses a clever idea to show that perspective is everything … Hartinger’s handling of Russel’s parents is spot-on as well … Hartinger handles his characters with the right amount of angst and humor, making this a valuable read.”
– VOYA

“The vast appeal of a Brent Hartinger novel lies in the way the author captures young men at their most vibrant and comical. Since the debut of his Geography Club in 2003, there has been no stopping his literary success.”
– Bay Area Reporter

“What is intriguing about the book is how very differently these two characters interpret the same events, and how oblivious each one can be to what is happening to the other…. There is a lot of humor in this book. The characters’ narrative voices sound authentically teen, and the section in which Russel tells about his coming out to his parents, their reaction, and his subsequent talk with the family priest particularly rings true. Min Wei’s story is equally well told.”
– School Library Journal

“I got a huge kick out of the differences in perspective. Russel describes Kevin Land’s smile as ‘impish’, while Min says ‘smug’ … Way fun … Good pick for fans of the rest of Brent Hartinger’s books, as well as for fans of GLBT lit that doesn’t feature a gay character being run over and of course, teens who enjoy breezy romantic comedy.”
– Bookshelves of Doom

BRENT HARTINGER is a novelist and screenwriter. His twelve novels include the 2003 gay teen classic GEOGRAPHY CLUB, which was adapted as a feature film in 2013.

Nine of Brent’s screenplays have been optioned for film, and four are currently in various stages of development, including PROJECT PAY DAY, a teen caper story based on his own novel, now in post-production for a 2020 release.

Brent currently has no permanent address, and instead continuously travels the world with his husband, writer Michael Jensen. Their "digital nomad" journey, which has been featured on CBS Sunday Morning and in Forbes, is documented on their website BrentandMichaelAreGoingPlaces.com.

About the Series: Russel Middlebrook

A gay teen struggles to make sense of his teenage years. The first book in the series, the gay teen classic Geography Club, was recently adapted as a feature film co-starring Scott Bakula.

You have subscribed to alerts for Brent Hartinger.

You have been added to Brent Hartinger's favorite list.

You can also sign-up to receive email notifications whenever Brent Hartinger releases a new book.