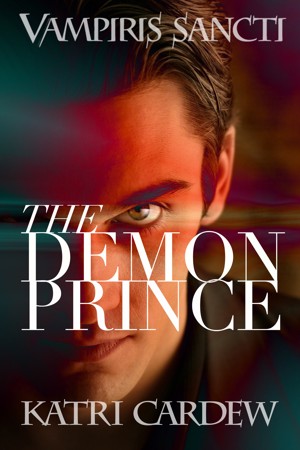 By Katri Cardew
Rated 4.40/5 based on 5 reviews
It had taken many years for the demon prince of the human world to organise a betrothal with a magical Elf as well as orchestrate her arrival on world. Then there were the problems of getting her to stop causing mischief everywhere she went, hiding out among Vampires, and poking her nose into every intrigue she found. More
If the worlds of the Reveal were to be viewed from the outside, it would seem that humans wished to be Vampires, Vampires wished to be demons, demons wished to be magical, and the magical wished for peace of mind.

It had taken many years for the demon prince of the human world to organise a betrothal with a magical Elf as well as orchestrate her arrival on world. Then there were the problems of getting her to stop causing mischief everywhere she went, hiding out among Vampires, and poking her nose into every intrigue she found.

Zyre had captured the stern heart of the Martyc demon but as a son of the Empire, he was not free to pursue her until he had reached the status of prince. Once in possession of wealth and authority he ensured the Elders of her world put her forth for an arranged marriage. The only problem was that the Elf absconded before anyone told her. Now he had to fight off a scorned woman while chasing a desired one, unravel the plots of Vampires as well as negotiate the treachery of one of his own kind. Then again, he was the most revered prince of the Martyc Empire and if anyone could pull off the impossible—it would be Vryn Dhaigre.

After reading, The Immaculate Adventures of One Florian Riben which was an epic story written with an astounding descriptive style, any author would envy. I just had to continue my journey back into Katri Cardew realms full of diverse creatures and trepidation.

The Demon Prince, Vryn Dhaigre is from the Martyc Empire where money is of the upper most importance. This book gives the reader a wide view into the world of demons revealing their strengths, weaknesses and interests. I was intrigued at the idea that Demons revelled in controlling financial interests of several worlds from funding wars to investing in inventions. The author had written this in such a way I started to ponder about whether what was written truly does exist.

One major flaw that was most evident in the Demon Prince was his desire for Zyre. He pursued the Elf even though they were the direct opposite in nature. Vryn became obsessed with Zyre and wanted to know her every move even consulting with a nefarious Goblin and a number of immoral acts which seemed like a game of chess in pursuit of winning Zyre over.

I adore Zyre free spirit and how she wasn’t subject to the same laws as demons, humans or vampires. She was unpredictable, mischievous, generous to those in need and I found her joys in sugar highs very amusing.

There are famous quotes cleverly placed among the pages adding that extra charm to this fascinating read. I recommend this book for people who want to retreat into paranormal fantasy about a world full of mystical creatures & a few mere mortals.

Another great Vampiris Sancti book! The author has managed to come up with a really unique environment and world that really is unlike no other, taking you on a magical and entertaining adventure through really high quality writing and perfectly executed storytelling. In this book we look at the otherworldly environment through the eyes of a male's perception, seeing how he views this strange world and his view about ruling it while trying to tame a wild elf, if you're looking for one of the best fantasy books in the genre then you have to check out this - Katri Cardew never fails to amaze me

I came to "The Demon Prince" last, after reading all of the other Vampiris Sancti books (well, all the ones that have been written so far), and I think this was a good one to save for last. By this time, I'd already encountered Zyre, the mischievous elf, several times, as well as the demon prince Vyrn Dhaigre. I also was slowly getting familiar with the world the author has created, with its population of demons, elves, gargoyles, pixies, vampires, and other magical creatures.

In this installment, the focus is on Vyrn Dhaigre, who has been obsessed with Zyre for years--demons often become obsessed with elves, and he is determined to have her for his own. He succeeds in setting up an arranged marriage, though his problem is keeping Zyre in one place long enough to have any real interaction with her. Though at first she's reluctant (and I remember her reluctance to lose her freedom from one of the other books), eventually through a give-and-take relationship of flirtation and sacrifice, they come closer together.

They do this while both dealing with the jealousy of Taryst, once betrothed to Dhaigre and now determined to make him pay, and the schemes she sets into motion. While the plot is complex and weaves in a large number of characters, its heart and its most enjoyable moments are those between the elf and demon prince. She's whimsical and charming, capturing first his obsession and then his heart with her own goodness, and he's brooding and charismatic, drawing her to him against her will.

I would recommend this novel to readers who enjoy fantasy novels, especially novels with an intricately created fantasy world and with a romance that grows and blossoms, rewarding the reader with its depth.

The Demon Prince is once again an incredible journey into different realities and other worlds. These are worlds that are populated with Demons, Vampires, Elves, Pixies, Mages and much more. Cardew does an excellent job of building the worlds and describing the inter workings of the worlds while building characters with tremendous depth.

In other books of the trilogy people have mentioned how they do not like the encyclopedia like descriptions of the worlds and characters at the beginning of each chapter. I believe that is the best part. Other writers put the same details in the stories which most of the time bog down the stories. By putting the information at the beginning of each chapter, instead of including it in the chapter, it gives me the freedom to read it, or skip to the actual story. I like that.

This story does not have as much Humor and is not as light hearted as the one about, "The Elf with Attitude". What it does do is clear up many of the things in the other books about how the worlds work. In each of the books, there are things you will not fully understand until you read all three of the books. Kind of like a treasure hunt through the books as you read. Once again I like that.

As I stated in one of my other reviews I am not a fan of Vampire books, but I am certainly hooked on these books. I am looking forward to the book that has to be coming to tie all three stories together in an exciting conclusion. Katie Cardew is a brilliant storyteller with a gift of describing every detail.

As I have said before Cardew's writing is not light reading and her stories leaves you wanting more.

Vampiris Sancti: The Demon Prince is Cardew's is another in her Vampire adaptations.
That said, it is only satisfactory as the story has a lot of redundancy. It almost seemed that the author needed to pad the pages to make it a longer book. That was a shame because
as short story,the book had a chance to be a good read. There were enough gyrations that it had some mystery but again, due to the repetition it was boring at times.