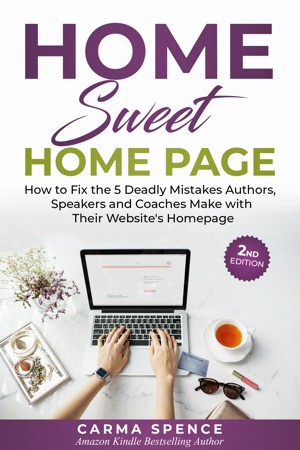 By Carma Spence
Learn how to increase book sales, get more speaking gigs and attract more coaching clients with your website…without having to get a web design degree or learn to code…even if you’re terrible at web stuff, don’t have a lot of time, and just want to hand this web stuff over to a Virtual Assistant! More
Attention Authors, Speakers, and Coaches:
Does your website attract nothing but crickets and tire kickers?

Your website’s home page is its most valuable virtual real estate. If it doesn’t grab your visitor’s attention, you may not get a second chance. Home Sweet Home Page can help you make sure this real estate effectively supports your business goals. This second edition expands on what was in the first edition, adding information on online presence in general, SEO tips, and more.

Learn how to increase book sales, get more speaking gigs and attract more coaching clients with your website…without having to get a web design degree or learn to code…even if you’re terrible at web stuff, don’t have a lot of time, and just want to hand this web stuff over to a Virtual Assistant!
Available ebook formats: epub
Price: $4.99 USD
Buy Add to Library Give as a Gift
How gifting works
Create Widget
Tags: website design homepage author website coaching website speaker website writer website
About Carma Spence

Because she’s been there, she knows that you can be a decent speaker despite being introverted, shy and socially awkward.
Carma is fiercely committed to supporting her clients as they unleash their inner speaking superhero and boldly communicate their message with confidence. Her superpower is to help people see what is possible for them and guide them on the journey from where they are to where they want to be, Vanquishing the Mind Goblins of self-doubt and second-guessing that keep them stuck.
The speaking bug first bit Carma in High School while on the Speech Team. Her activities earned her several awards, a Letter in Speech, and a Degree of Honor with the National Speech & Debate Association.

After college, she joined Toastmasters and earned her Distinguished Toastmaster (DTM) award, the highest level of educational achievement in Toastmasters earned through a variety of speaking and leadership assignments.

People often comment on Carma’s strength and courage, but these qualities were hard won. In 2010, she left an emotionally abusive marriage, only to fall into another bad relationship. That one ended the night her boyfriend attacked her.

It was that fateful night that woke her up and got her to do the inner work she needed to do. After a year of counseling, training and studying Universal Laws, she met a good man who loves her as she is.

But the trials weren't over.

Just as they announced their wedding date, Carma was hit by a car while crossing the street, resulting in multiple broken bones.
It is the combination of all these experiences—both good and bad—that makes Carma a good mentor to those struggling with owning their gifts.

You have subscribed to Smashwords Alerts new release notifications for Carma Spence.

You have been added to Carma Spence's favorite list.

You can also sign-up to receive email notifications whenever Carma Spence releases a new book.