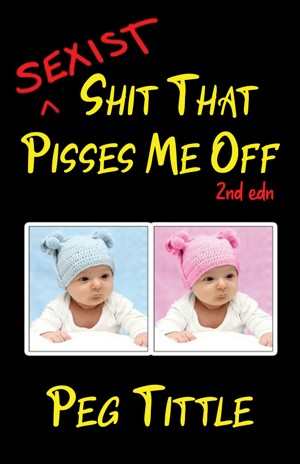 Sexist Shit that Pisses Me Off (2nd Edn)

The title says it all. A collection of close to two hundred exposés and analyses of everyday sexist shit (and gender shit, since gender is aligned with sex) that pisses me off.

This second edition includes all of the pieces in the first edition, as well as about seventy additional pieces.

"Woh. This book [1st edn] is freaking awesome and I demand a sequel." Anonymous, barnesandnoble.com More
The title says it all. A collection of close to two hundred exposés and analyses of everyday sexist shit (and gender shit, since gender is aligned with sex) that pisses me off.

If you've purchased the first edition of Sexist Shit that Pisses Me Off (or more than one volume of Shit that Pisses Me Off) contact me through either of my websites (hellyeahimafeminist.com or pegtittle.com), and I'll send you a copy of the second edition for free (because hey, you've already purchased some of it!). (Due to printing and postage costs, this offer applies only to the epub and pdf formats.)

"Every now and then, I run across an author’s work to which I feel an immediate personal connection: Peg Tittle’s is one. Although she has an extensive publishing history, Sexist Shit that Pisses Me Offis my introduction to her thoughtful and thought-provoking essays. While reading, I found myself nodding in agreement and sometimes grinning in delight that someone else has wondered about a particular thing. Granted, I wasn’t 100% in agreement on every topic, but even those really caused me to think and consider the points and arguments presented, and many of these I want to think about further because I’m just not clear in my mind on them just yet.
The author’s writing style suited me well. It carried me right along from start to finish; I would normally call it an easy read, except it’s not. The title should clue the reader that these are not happy topics or happy essays. I would read a couple of pieces and then needed a breather. I had to step away from the book to think and calm my thoughts. Things hit home, some things that I’d never put words to myself.
I want to say that this book is for everyone but for various reasons, it is not. Some people will never be open to even the most apparent issues. For the rest, I recommend this book be read slowly, a little bit at a time; there’s so much to take in, and the emotional impact can be intense. Sexist Shit that Pisses Me Off would be a great book to share with family, friends, and a book club." Karen Siddall,

About the 1st edition:

"Woh. This book is freaking awesome and I demand a sequel." Anonymous, barnesandnoble.com

Her screenplays (including What Happened to Tom and Exile) have placed in several competitions, including Moondance, Fade-In, GimmeCredit, WriteMovies, Scriptapalooza, and American Gem. Aiding the Enemy has been produced as a short by David McDonald.

She has also written several nonfiction books: Just Think About It (Magenta); Sexist Shit that Pisses Me Off (Magenta); Critical Thinking: An Appeal to Reason (Routledge); Should Parents Be Licensed? Debating the Issues (Prometheus); What If? Collected Thought Experiments in Philosophy (Longman); Ethical Issues in Business: Inquiries, Cases, and Readings (Broadview).

She was a columnist for the Ethics and Emerging Technologies website for a year (her "TransGendered Courage” received 35,000 hits, making it #3 of the year, and her “Ethics without Philosophers” received 34,000 hits, making it #5 of the year), The Philosopher Magazine's online philosophy café for eight years, and Philosophy Now for two years. In addition, her short commentary pieces have also been published in Humanist in Canada, Links, Academic Exchange Quarterly, Inroads, Elenchus, South Australian Humanist Post, Forum, and The Humanist. Her longer pieces have appeared in Free Inquiry, The International Journal of Applied Philosophy, New Humanist, The New Zealand Rationalist and Humanist, Philosophy in the Contemporary World, Sexuality & Culture: an interdisciplinary journal. And she's had a list published at McSweeney's (“Why Feminist Manuscripts Aren’t Getting Published Today”). She now blogs (sporadically) at pegtittle.com and hellyeahimafeminist.com.

She has an M.A. in Philosophy, a B.Ed., and a B.A. in Literature, and has received over twenty Arts Council grants.

You have subscribed to Smashwords Alerts new release notifications for Peg Tittle.

You have been added to Peg Tittle's favorite list.

You can also sign-up to receive email notifications whenever Peg Tittle releases a new book.