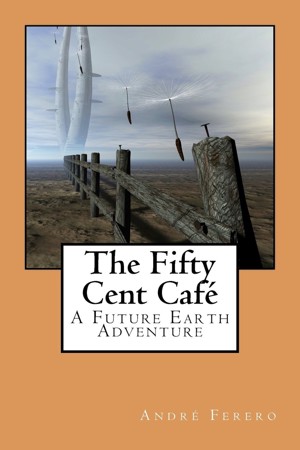 By André Ferero
Rated 4.00/5 based on 1 review
Luke Lock lives on Earth in a not too distant future. He is an exemplary citizen who loves his life and views the government as benevolent.

But Luke's views are about to change when he sees an unexpected arrest on State Television.

Luke decides to start his own investigation, but has no idea where to start and who to ask for help. More
Luke Lock lives on Earth in a not too distant future. He is an exemplary citizen who loves his life and views the government as benevolent. Luke revels in working for the greater good, strongly believing that his work helps to guarantee the safety of others on planet Earth. Luke never questions the reason why a Security Tag was implanted in his shoulder by State Surveillance, believing it is there for his own good.

But Luke's views are about to change when he sees an unexpected arrest on State Television. The arrest doesn't make sense to him, especially when he realizes who is being arrested by the infamous Captain Gore and his feared team of Avoiders.

Luke decides to start his own investigation, but has no idea where to start and who to ask for help.

In this adventure Luke has to make some very important decisions that will not only affect his own life but also the stability of society.

André Ferero is a South African writer who has been living in France since July 2006. Even though his love for Africa hasn't diminished during that time, he is not complaining about living in the kingdom (well, Republic) of food and wine.
His interests include photography, reading, (good) movies, hiking, wine tasting, traveling and trying to figure out this experience called life. Music is one of his biggest loves and he listens to almost anything, from old to new.
He writes as often as possible. He describes his fiction as speculative, with a focus on the characters in possible futures. He has also just finished a South African guidebook that is different from all other guidebooks on the topic and will be very helpful to travelers who want to plan their own trip to Southern Africa.

Reviews of The Fifty Cent Café by André Ferero

Another great book by Ferero! This story centers around a society under complete control by the governing powers. People are implanted with chips that make them act and feel however the Supreme Mind wants them to. Every second of every day is regulated strictly. Citizens, called Taggers, are told that it is for their own protection against the human rebels (those who escaped and will not conform). Citizens who aren't Taggers are called Voids and are basically human robots.

The story revovles around a central group of characters- Taggers named Luke and Frank, Voids named Eric and Kayden, and Captian Gore and his Avoider team (basically they are police). Some Taggers have heard the stories of The Fifty Cent Cafe, a human rebel hideout left over from the war that trashed the world and brought about the system. Taggers and Voiders alike begin to change, having anti-system thoughts. With the help of some human rebels, they attempt to escape their life of bondage and control in order to live a more rewarding life of freedom. This is the story of their struggle for freedom.

It is a great story full of political, psychological, and philosophical overtones. Ferero again does a great job of incorporating all of these elements into an exciting read. I only had two issues with it: There was a lot of narrative and being told what was happening, instead of it playing out in the story, and the ending left a lot to be resolved. Perhaps a sequel is in the works?!

You can also sign-up to receive email notifications whenever Andr&eacute; Ferero releases a new book.