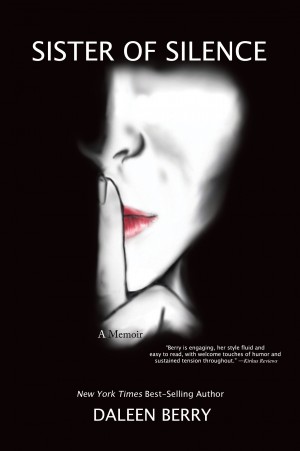 In this groundbreaking memoir, Daleen tells how she was raped at thirteen and then married her abuser after becoming pregnant, when her high school was featured on national television for having the highest number of pregnant teens in the U.S. She courageously reveals her own plans to commit murder-suicide—and what stopped her.

Kenneth V. Lanning, a retired FBI special supervisory agent who spent more than twenty years teaching about family violence at Quantico, Va., wrote the foreword for Sister of Silence. He says it's "ultimately a story of survival and hope." Dr. Jacquelyn Campbell, a Johns Hopkins University nursing professor and one of the country's leading family violence researchers, calls Sister of Silence "wonderful!"

Campbell was the first professor to place the book on her syllabus. SOS is being taught at the University of Louisville; Dr. Jean Shimosaki, LCSW, MSW, a Bay Area therapist, is using it with her patients, as it provides “a step-by-step guide for healing.”

In 2006, an excerpt of SOS took first-place in the Appalachian Theme category at the West Virginia Writers’ Competition, and was banned at Livermore High School in California and removed from library shelves as “Banned Book Week 2011” began. It has been featured at “Hope For the Future: Ending Domestic Violence In Families,” hosted by the AIA (UC Berkeley), on The Bob Edwards Show (Sirius XM Radio), and on In A Word, a literary show produced by TV30.

The author is a California native who grew up in Preston and Berkeley counties in West Virginia, and went to work at The Preston County Journal. Among her many awards was one in 1990, when she won a first-place award for investigative journalism. In 1997, she worked for The Dominion Post, covering welfare reform. Among her awards are two second-place honors for her 2007 weekly columns in the Cumberland Times-News, one of which was born from SOS. Berry’s articles about Lashanda Armstrong, the mother who drove her van into the Hudson River in 2011, killing herself and three of her four children, appeared online at The Daily Beast.

This is what a few people are saying about this book and this author:

“Almost never is an interview subject so open or so candid about the most intimate details of the most horrible moments of her life. Daleen is a very brave women and I hope her story will help other girls and women . . . Daleen you are a magnificent storyteller.” —Bob Edwards (Author of Voice in the Box: My Life in Radio)

“In Sister of Silence, author Daleen Berry gently guides us through the dark corridors of her life, so that we can emerge in the light, as she has courageously done, with a sense of hope, authenticity and courage. Sister of Silence is a brave book, written from the heart. It’s a must read for the brave-hearted.” —Asra Q. Nomani (Author of Standing Alone: An American Woman’s Struggle for the Soul of Islam)

“For marketing purposes, nothing better can happen to a book than having it banned. A banned book is a sure sign that you’ve done something very right.” —Lee Maynard (Author of Crum)

Daleen Berry is a New York Times best-selling author and an award-winning investigative journalist. She has authored or co-authored five books, including her most recent, GUILT BY MATRIMONY (2015), about the police investigation into the murder of Aspen heiress Nancy Pfister. Berry’s New York Times status came about due to her work on PRETTY LITTLE KILLERS and THE SAVAGE MURDER OF SKYLAR NEESE (2014), about the murder of a Morgantown, W.Va. teenager.

She came to be known as an expert in the field of child sexual abuse and domestic violence, after decades of research and writing about topics. Berry has also investigated and written about many criminal and civil trials during her time as a crime reporter. More recently, she has written for the Associated Press, the Daily Beast and Huffington Post. Berry’s keen insight into the human psyche, her deep compassion, and her sensitivity allow her access to personal stories that were off limits to other reporters.

Berry’s memoir, SISTER OF SILENCE, details her journey from sexual abuse victim to survivor while growing up in Appalachia. Ken Lanning, an FBI special agent and one of the country’s renowned profilers, wrote the book’s foreword. Therapists are now using Berry’s book to help people understand their ability to speak out, overcome their fears, and achieve personal power. Students and instructors at Johns Hopkins University, UC Berkeley, Towson University, Oklahoma City University, and elsewhere are using Sister of Silence in the classroom. It has received both critical and popular acclaim.

After a 2012 interview on The Bob Edwards Show, the veteran broadcast journalist and former NPR Morning Edition host called Berry a “magnificent storyteller.” Kirkus Reviews calls her “an engaging writer, her style fluid, with welcome touches of humor and sustained tension throughout.” SISTER OF SILENCE was awarded first place in the Appalachian Theme category of the West Virginia Writers’ Competition. In 2012, Berry’s as-yet-unpublished book, LETHAL SILENCE, took first place in the Pearl Buck Award in Writing for Social Change category, given jointly by West Virginia Writers and the Pearl S. Buck Birthplace Foundation.

Berry is an experienced public speaker who has delivered a TED talk and various speeches at conferences around the country, including Connecticut College’s program, “Standing on the Shoulders of Giants.” She has also spoken to students at Johns Hopkins University, UC Berkeley, and Penn State University, where her memoir has been used in the classroom.

Berry and her books have appeared on the Dr. Phil Show, 20/20, Crime Watch Today, 48 Hours, the TODAY show, Dateline, Lifetime, Discovery ID, and in international publications such as Elle and People magazines. In 2016, she is slated to appear on TV episodes for Oxygen Network and Discovery International.

Sister of Silence Book Trailer
A brief look into a book that readers say is changing their lives, this video goes beyond just a synopsis of one woman's memoir: it also provides information to help empower victims of abuse.

You have subscribed to alerts for Daleen Berry.

You have been added to Daleen Berry's favorite list.

You can also sign-up to receive email notifications whenever Daleen Berry releases a new book.