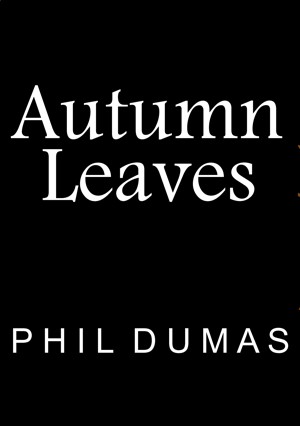 After receiving a Certificate of Merit from the Royal School of Music, Phil later went on to become arrested in Soho for breach of the peace ... for singing.

Strangely enough, he lives in Devon – where people go to die. Contact: phildumas@talktalk.net

This story had a very different prose style than the sort that you usually see on Smashwords, which I noticed right away. The tone of the story really makes even more sense by the end, which has a way of putting it all into perspective. Let's just say that the story lives up to the author's description.

A man finds the love of his life in a beautiful and brilliant librarian named Camilla. While he's endearingly awkward, she's charming and charismatic. He thinks he's the luckiest man in the world when she says yes to a date with him. But will the happy times last?

I don't like stories with flowery language. They're usually melodramatic and pretentious sounding. But Autumn Leaves is an exception because there's a lot of action and great conversations between the man and Camilla and plenty of humor. While it was at some parts still too flowery for me, the writing was mostly well done and powerful:

It was late Autumn; breathtakingly fresh and charmingly warm, and just like Camilla, rejuvenatingly pure. It was her.
No! It really was her! There she was, sitting pretty in the park, dazing into a space which I dearly wished I could fill.

I walked towards her, still unnoticed. The stage was set. The Council had taken away the romantic touch of fallen leaves but the backdrop was otherwise perfect. All was perfect, but for my thoughts of opening lines fleeing the scene with every nearing step.

She looked towards me and smiled: a picture my wallet would have gave its leather skin for. I took a deep breath and struck a deal with God.

The protagonist is so awkward, I wonder if them getting together was Camilla's plan all along and she just let the man think it was his idea. Which works just fine for me. I love it when awkward guys are the love interest. There aren't enough of them in romance and I'm always happy to read their stories.

I can also see this man and Camilla as a real couple. His romantic side complemented Camilla's love of medieval romance literature perfectly. Their chemistry is very real as well, and nothing feels forced between them, like it does in plenty of romance novels.

The only complaint I have is near the end of the story, when Camilla gets the bad news. It's in the last couple of paragraphs in the story, and I wanted more. I wanted to see the aftermath of getting the news instead of a very sudden ending. Because of that, this story only gets 4.5 out of 5 stars.

But if you want a short, quick and charming read, I recommend Autumn Leaves.

What a fabulous little story! Intelligent, funny, beautifully written - but so, so sad! I'd give it six stars if I could.

An affecting, well-told short story which, despite its length, manages to move the reader, leaving them both happy, and sad, in an effective bittersweet manner.

(review of free book)
Kate Nguyen reviewed on Jan. 26, 2012
(no rating)
I really liked this book but it was too short. Perhaps, one day, you could go back and fill us in on the three years you had with her....

A beautiful and heartfelt ode to the love of his life. The words enchanted me, making me part of the interlude of days dreamed about and passions fulfilled.
Thank you for your excellent story and scenes that wrapped warm arms around me.
Please... write more.
Sasha

Very touching. Didn't know men had it in them to write such things lol. Well done! Loved the catchy lines.

You have subscribed to alerts for Phil Dumas.

You have been added to Phil Dumas's favorite list.

You can also sign-up to receive email notifications whenever Phil Dumas releases a new book.