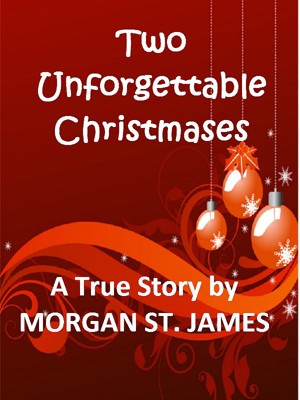 By Morgan St. James
This short story is Morgan St. James' reminiscence about two Christmases in her childhood that showed the power of love. More
In 1949, when Morgan St. James was nine years old, her family moved from Chicago to Miami. It was a disaster for the smart Yankee who wore glasses, couldn't play sports well and wore shoes to school. She viewed being smart as a curse. By the time Christmas came, she was miserable. Find out what happened next.

Morgan has 15 published books available in paperback and digital editions. In the Silver Sisters Mysteries series, A Corpse in the Soup and Terror in a Teapot are also available as audio books. Vanishing Act in Vegas and Diamonds in the Dumpster will be release as audio book in 2017.

A self-described workaholic, Morgan is an entertaining speaker, and frequently appears on author’s panels, meet the author events, at conferences as a workshop presenter and on radio and podcasts. She is a Board member of Writers of Southern Nevada and a member of multiple writers groups. She publishes the bi-monthly online magazine Writers Tricks of the Trade. Links to the current issue may always be found on www.joomag.com.

The first Silver Sisters Mystery, A Corpse in the Soup co-authored with her real sister Phyllice Bradner, was named Best Mystery Audio Book by USA Book News. Plotting and planning for book 5, Bones in the Belfry, will commence in 2017.

Although she greatly enjoys writing funny mysteries, three of her recent books deal with human trafficking and domestic abuse. Betrayed was inspired by true events that happened in the late 1950s, and poses the question: What would you do if you woke up in a strange bedroom bound and gagged? Visit http://betrayedthebook.wordpress.com to find out why Morgan had an obsession to write this book.

La Bella Mafia is the shocking true story as told to Morgan St. James and true crime author Dennis N. Griffin by Bella Capo who was the abused daughter of a crime boss, grew up to run after-hours clubs on famed Sunset Strip in Hollywood, became a white woman boss in the Crips and founded and now manages the online movementLa Bella Mafia at Facebook. Visit http://labellamafiabook.wordpress.com for more information.

Incest, Murder and a Miracle to be released on December 17 is the true story of Cheryl Pierson Cuccio and Robert Cuccio. It is a book not to be missed. In 1986, sixteen year old Cheryl Pierson, victim of incest and abuse, contracted with a classmate to kill her father to protect her 8 year old sister from his advances. It was front page news for years. In 2012 her husband Robert sustained a fatal heart attack and was dead for 43 minutes. Determined to never be a victim again Cheryl demanded the doctors keep trying to revive him. Not only was it a medical miracle when he came back to life, but he is back at work as an award-winning oncology nurse. This is a shocking yet inspirational book. More info at www.incestmurderandamiracle.com.

You have subscribed to alerts for Morgan St. James.

You have been added to Morgan St. James's favorite list.

You can also sign-up to receive email notifications whenever Morgan St. James releases a new book.